GLENDALE, Ariz. -- The Arizona Cardinals played for 18 years
at a college stadium in Tempe. 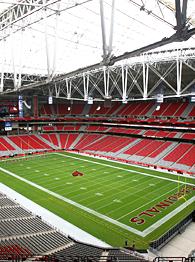 Now the University of Phoenix -- the nation's largest private
university -- will pay the NFL team $154.5 million over the next 20
years to put its name on the Cardinals' new home.

The "University of Phoenix Stadium" label was unveiled at a
news conference outside the $455 million structure in suburban
western Phoenix on Tuesday.

The for-profit university has 323,000 students, most of them
working adults in their 30s, at campuses in 39 states and through
online programs. Its parent company, Apollo Group Inc., had $2.3
billion in revenue last year, ranking it among Arizona's largest
companies.

"This is the first time a National Football League venue has
been named after an educational institution," Apollo president
Brian Mueller said, "and the irony of that deal is not lost on
us."

The Cardinals have naming rights to the stadium as part of the
deal approved by voters to build the long-sought home for the NFL
franchise, which had played at Arizona State University's Sun Devil
Stadium since moving to Arizona in 1988.

Apollo has had some negative publicity lately.

Earlier this month, the company saw the revival of a lawsuit
that claimed the University of Phoenix wrongly paid incentive
compensation to recruit students. The company also is undergoing a
Securities and Exchange Commission review of its stock option
granting practices.

Michael Bidwill, son of team owner Bill Bidwill, is the
Cardinals' vice president and general counsel and point man on the
stadium project. He said he believes the issues facing Apollo were
the type of problems that any highly successful candidate for
naming rights would have.

"It's clear they're addressing those and they're going to be
resolved," Bidwill said. "But as they move forward, they've got a
tremendous story to tell. That's part of the reason they wanted to
get involved in their first-ever sports marketing deal. They hadn't
even had a suite at any of the local stadiums or arenas before."

Mueller acknowledged that the company has SEC issues.

"Have we been hurt a little bit by what has happened from an
SEC standpoint? Yeah," he said, "but there's a hundred other
companies going through the same thing. While it doesn't make us
feel good, it is part of the publicly traded business and we have
to be the best participant in that as we can."

The stadium naming venture is part of a marketing effort aimed
at emphasizing the university's success with students, Mueller
said.

"Our next step is to tell the story of an innovative
institution that provides programs for working adult students and
gives them a chance to do things," he said. "It's a rigorous
process and the ones that make it put a lot into it."

In addition to the Cardinals' games, the stadium is the new home
of the Fiesta Bowl and in January will host the first of the new
BCS college football championship games.