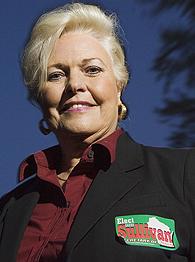 The usually ho-hum race for Wisconsin secretary of state is being spiced up by one candidate's naughty tell-all book about her bed-hopping exploits with Green Bay football legends during the team's glory days under Vince Lombardi in the 1960s.

Sandy Sullivan, a 65-year-old Republican with no political experience, self-published a gushing memoir in 2004 titled "Green Bay Love Stories and Other Affairs" in which she claims she was the girlfriend of Packers Paul Hornung and Dan Currie, deflected a pass from Hall of Famer Don Hutson and was on the receiving end of a saucy comment from Richard Nixon.

If the book is to be believed, the Packers did a lot of their scoring off the field, and Sullivan got her share of playing time.

In football-crazy Wisconsin, it is unclear whether the book will be a gain or a loss for Sullivan, who is not given much of a chance of beating Secretary of State Doug La Follette, a 28-year incumbent and a member of one of Wisconsin's most distinguished political families. But the book is getting people talking.

In it, she confides that her goal was always to marry a pro football player, saying they are "fast, sleek and clean," are built like "Greek gods" and love women.

"The football players of the 1950s and '60s were every bit as 'HOT' as the men of the present day, if not more so," Sullivan writes of the days when she was a trim, miniskirted brunette who did some modeling. "Remember, the '60s was the 'dawning of the Age of Aquarius' and some women ... were thrilled to experience this brave, new freedom, and celebrate our sexuality ... and the football players loved it!"

Sullivan, who is now a blonde and owns a marketing company that she says sets up autograph sessions and Packer appearances, is not hiding from her past. If anything, she is reveling in it. Her campaign Web site prominently mentions the book and features a picture of her with former Packers quarterback Bart Starr.

To those offended by the notion that a Packers groupie wants to run for state office, Sullivan said: "It tells a little bit about my youth, which was 50 years ago. If anybody has any problems with it, they ought to look in their own closet."

Rick Wiley, executive director of the state Republican Party, downplayed any concerns that the book could hurt her campaign.

"Everyone has a past out there," he said.

He described Sullivan as a breath of fresh air and suggested her candidacy has served a useful civic purpose: "She's been a fantastic candidate for an office that not many people take a long look at at all."

As for her opponent, La Follette -- a distant cousin of Bob La Follette, a former governor, senator and one of the foremost figures of the clean-government Progressive movement of the early 20th century -- bemoans the attention the book is getting.

But "it's sort of amusing, quite honestly," the 66-year-old Democrat said. "She has a right to her life and if she wants to put it in a book, it's OK."

Sullivan says she was 19 in 1961 when she took a job with the Packers selling tickets and met Hornung, the Heisman Trophy-winning running back. She was instantly smitten with the wavy-haired golden boy known for his off-the-field romantic exploits.

"Here he was, in the flesh! Oh! My God! He was soooo CUTE! ... He immediately asked me out and I immediately accepted," Sullivan wrote. She quickly learned "there are two things football players think about all the time ... FOOTBALL AND SEX ... and seldom in that order."

She recounted an encounter with Hornung during training camp in which Hornung picked her up at 5:30 a.m. and drove to a Green Bay hotel for sex. Some Packer coaches were in the lobby, so Hornung made her climb the fire escape to the fifth floor while he went in through the lobby.

Hornung broke down the door to the fire escape, almost knocking her over the railing, she wrote. She wrote she doesn't remember having sex with him that night, "although I must have!"

Hornung did not return numerous messages left by The Associated Press. The book, however, includes a foreword in which he describes Sullivan as a "carefree, fun-loving girl who fit right in with me and the rest of the 'Pack.'"

When she was 20 she met Hutson, who was 50 then and long past his playing days. She said Hutson asked her to sleep with him, but she turned him down because he was a "relic from the Stone Ages" and she was in love with Hornung.

She also fell for Currie, a Packers linebacker. ("SIGH! One would have to be in a coma not to want him," Sullivan wrote.) She later married Currie's dentist, Matt Sullivan. He died in 1984.

One time, Nixon came to Green Bay for a ceremony to honor Starr, and Sullivan attended in a miniskirt. When Nixon began to speak, she started swinging her legs and smiling at him. He returned the smile.

Later he shook her hand, leaned over into her and softly said, "Hello there ... so you must be the CHERRY of the evening." No one was sure what Nixon meant, Sullivan wrote, though she speculated he had confused her with Starr's wife, Cherry.

Packers fans at Lambeau Field on Monday said her stand on the issues -- not her one-night stands -- would determine whether they would vote for her.

Seventy-eight-year-old Carol Williams of Menasha said she was surprised at Sullivan's openness, but not her exploits.

"Who isn't doing things like that these days?" she said.

Barb Hill, 65, of Luxemburg, said of Sullivan's love life: "I can't see what that has to do with voting, why you'd need to know."

For her part, Sullivan wrote that her book could prove educational.

"Many of my football player friends tell me they have not read a book in years," she wrote. "If they want to know what I've written about them, they will have to read the book. Consider this book my personal contribution to the literacy of some of the former Green Bay Packers!"