The Cowboys denied Sunday that wide receivers coach Todd Haley will be disciplined as a result of an incident with wide receiver Terrell Owens last week, ESPN has learned.

When asked on Friday by ESPN's Ed Werder whether there would be disciplinary action after the argument between Owens and Haley, Cowboys owner Jerry Jones said: "Yes, Against Haley."

He added, "This is not a reflection on TO."

The team on Sunday said no action would be taken. 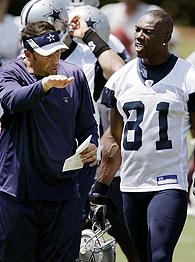 Owens said on his radio show Friday that his relationship with Haley was ruined by a blowup this week. It began when Owens missed the start of Wednesday's practice because of an upset stomach, and Haley berated him for being late. Owens held his tongue then, but they later argued during a meeting.

The story getting out seems to bother Owens the most because Haley vowed since training camp that all internal matters would stay behind closed doors. Owens spoke with reporters for 45 minutes Wednesday without ever mentioning any problems with Haley. But the incident was reported by several media outlets Friday before Owens gave his side of the story later on his weekly show.

From now on, T.O. said, "there will be nothing else, no other dialogue" between him and Haley.

"There will be no more friendly nothing because I don't trust anybody like that," Owens said. "I will go out and practice hard. I will respect him as a coach, and he should respect me as a player. Anything outside of that I am not going to be able to deal with.

"Right now, we are merely coworkers, and that's it," he added.

After a huge game in the Cowboys' 34-6 win over the Texans on Sunday, Owens softened those comments a little, but not completely.

"He's my coach and I respect him," said Owens, who had three touchdown catches. "That doesn't mean we have to go to lunch together, play cards together."

Haley and Owens chatted before the game and even hugged after the receiver's third touchdown on Sunday.

Owens caught only three passes for 45 yards in a loss to Philadelphia on Sunday. It was a key division game for the Cowboys and a personal revenge game for Owens after the Eagles dumped him midway through last season.

TV cameras showed Owens screaming at Haley -- who also carries the title "passing game coordinator" -- on the sideline during the game. Although teammates said some of his rants were encouragement, Owens admitted saying, "Why am I here?" about his limited action. Coach Bill Parcells later noted that 13 balls were thrown to Owens, five more than anyone else; two were intercepted and one was dropped.

The confrontation between receiver and coach occurred Wednesday, the first time the Cowboys were back on the practice field. A strength coach was sent to get Owens when he was absent.

"By the time I step on the field, Todd starts cursing at me, this and that, and I'm like, 'Dude, I was in the restroom,"' Owens said. "He said, 'I don't [care] what you were doing. Everybody else is out here."'

Owens said he didn't respond, although he later apologized to Parcells and was told, "All right, just try to get out here a little earlier."

Then Owens and Haley butted heads during a meeting.

"It's all about frustration. Everybody is still frustrated from the loss on Sunday. At some point, we had our time to vent on Monday, Tuesday and have that bad taste that sick feeling out of your mouth. On Wednesday, it's a new day. It's a new game plan, a new team that we're getting prepared for. That's where our focus and direction should be. But obviously Todd, he's been frustrated, and he's taking it out on other people."

Owens has a history of not getting along with coaches, from his position coach to the offensive coordinator to the head coach. It led to his dismissal from San Francisco and Philadelphia.

Although Owens missed most of the preseason with a hamstring and had a highly publicized accidental overdose, he insists that he's been on his best behavior in his first season in Dallas.

"I know in the back of people's minds they are waiting for something to happen," said Owens, in the first year of a three-year, $25 million contract with the Cowboys. "I have made a conscious effort not to go down those roads again."

Owens made it clear that he'll still listen to Haley, but their discussions must be limited to Xs and Os.

"In business, you have people that work together and don't necessarily get along together," he said.

Owens said "anything is fixable," but he feels his trust in Haley "is being violated."

"I will have a hard time [trusting him] here on out," Owens said.