"THERE'S GOING TO be some controversy about you going back to play."

Elliot Pellman looks Wayne Chrebet in the eye in the fourth quarter of a tight game, Jets vs. Giants on Nov. 2, 2003, at the Meadowlands. A knee to the back of the head knocked Chrebet stone-cold unconscious a quarter earlier, and now the Jets' team doctor is putting the wideout through a series of mental tests. Pellman knows Chrebet has suffered a concussion, but the player is performing adequately on standard memory exercises. 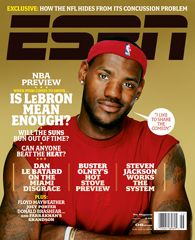 Then he asks, "Are you okay?" When Chrebet replies, "I'm fine," Pellman sends him back in.

YOU GET KNOCKED DIZZY, maybe you black out, you slowly come to your senses. You feel strangely removed from your surroundings, maybe you have a seizure, maybe you puke. But you put your helmet back on as soon as you can walk straight. Any behavior, no matter how bizarre, becomes routine if someone repeats it often enough. And for decades, professional football players have adapted to concussions, shaking them off, calling them "dings," laughing about how they can't remember the number of blows to the head they have taken.

Only in recent years have scientists started to understand exactly what happens inside a brain when a head gets smashed and to explore why some players get hurt worse or cope better than others. The NFL is among those looking for answers, with good reason: According to league data, about 100 players a year suffer concussions from hits that average 98 times the force of gravity.