Mike Nolan and Jack Del Rio are ready to suit up.

The San Francisco coach and his Jacksonville counterpart have
the NFL's permission to wear dress suits designed by Reebok during
two games this season. 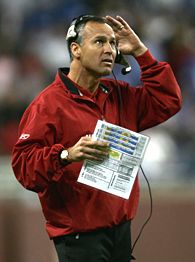 Nolan is expected to debut his old-school outfit -- a black suit,
a white shirt and a red-and-gold-striped tie -- at the 49ers' home
game against Seattle on Sunday. Del Rio also will wear a
suit-and-tie ensemble in Monday night's home game against the
Giants.

NFL spokesman Brian McCarthy said the 49ers coach has permission
to "test-drive" the suit at two games this season.

"Working with Reebok, they were able to come up with something
that should work for him," McCarthy said.

Nolan first broached the idea shortly after he was hired by the
49ers in 2005. He believes the ensemble will project an image of
authority while also honoring his father, Dick, the 49ers' coach
from 1968-75, and Hall of Fame coaches such as Tom Landry and Vince
Lombardi.

But the NFL couldn't immediately give permission, citing its
lucrative outfitting contract with Reebok. Nolan has worn pullovers
and polo shirts during his tenure, but has worked with Reebok's
designers to come up with the natty ensemble he's expected to show
off Sunday.

Dan Reeves is thought to be the last NFL coach to wear a suit on
the sideline. Coaches have been required to wear team-issued
clothing since 1993.

Del Rio is expected to wear his suit again at the Jaguars' game
against Indianapolis on Dec. 10, and Nolan will suit up again at a
game still to be determined.