TAMPA, Fla. -- Andre Waters, a defensive back who spent most
of his 12 seasons in the NFL with the Philadelphia Eagles, was
found dead of a self-inflicted gunshot wound early Monday. He was
44. 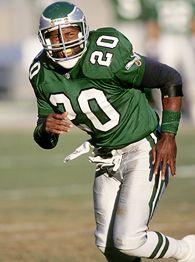 His body was found at about 1:30 a.m. at his Tampa home, the
medical examiner's office said. He had shot himself in the head.
Toxicology reports were ordered and results will be available in
four to six weeks, the office said.

Waters' body was found by his girlfriend, Hillsborough County
sheriff's spokeswoman Debbie Carter said. The woman's name was not
available, and the sheriff's office had no further details, Carter
added.

"What a devastating piece of news," Eagles radio voice Merrill
Reese said in a statement on the team's Web site. "Andre was a
guy who could light up a room with his personality. As a
football player, he came from nothing. But he made himself into
a fine player by working hard and dedicating himself to the
game."

Waters, an assistant football coach at Fort Valley State in
Georgia, joined the Eagles out of Cheyney State in 1984 and played
with them at cornerback and safety through 1993. He was known as
one of the NFL's hardest hitters and often was fined for some of
his tackles. He spent his last two seasons with the Arizona
Cardinals.