Let's burrow down inside the game, shall we? Past the crust and the mantle, through the outer core, all the way down to the inner core, where a quarterback can calmly sort through the cacophony at the line, or toss a cursory glance at his best receiver and change everything. Let's turn ourselves into human drill bits and make the idea of going inside the huddle seem as quaint and distant as watching the game from a passing blimp.

We've got an excellent guide, which helps. Philip Rivers is a good young Southern boy who's been an inner-core, head-for-the-game football guy since he was 6, when he started hanging around the high school team that his father coached in Decatur, Ala. He's been anticipating blitzes and making sight adjustments for as long as he can remember.

You want to know how deep Rivers can take you? Ask him about the barely controlled chaos of the wildest six seconds in sports -- the three seconds before the snap, the three seconds after -- and
listen to his voice rise and his words accelerate. That's what happened as he described the hectic ticks leading up to LaDainian Tomlinson's 41-yard touchdown run that propelled the Chargers to a
32-25 win over the Browns on Nov. 5: "The defense jumped into a different look and Nick [center Nick Hardwick] is hollering, 'Solid! Here! Here! Here!' I hear Dielman [guard Kris Dielman] going, 'AB! AB!' This is all happening while I'm saying, 'Blue 85! Blue 85!' And then Dielman said something else and I said, 'Hut!' and the ball got snapped and boom-boom-boom-boom. Touchdown."

Rivers, standing in the Chargers' locker room three days after that game, throws his hands in the air. It's happening all over again for him. You can't help but think, Damn! This guy loves his work.

The past two years, as Rivers waited his turn behind Drew Brees, there was no outlet for that emotion. Instead, he invented ways to be involved. Standing on the sideline in his ball cap, one of his pastimes--and when you throw 30 passes in two years, passing time is all you've got--was to count Bolts helmets on kickoffs. Nobody asked him, and in the NFL they usually have 11 in place, but the poor kid was just so bored that he didn't know what else to do. (It should also be noted that at no time during his two-year apprenticeship did the Chargers fail to have 11 guys on the field during a kick.)

But now that he's playing, and excelling, Rivers is like a spring unsprung, showing a rare blend of efficiency, intelligence and openmouthed exuberance. His performance in a remarkable 21-point, second-half comeback over the Bengals on Nov. 12 -- 24 of 36 for 338 yards, 3 TDs and no picks--was just the most public example of his stunning emergence.

Less publicly, Rivers is studying defenses like a crazed physicist. He's hollering in the huddle and changing plays at the line and playing golf with his receivers. He's a football player again, down to his own ferrous core. It's all part of the plan that started last spring, after Brees signed with the Saints and Rivers had to curtail his eagerness by holding himself to one all-encompassing instruction: Be yourself. "He has played so much in his mind as well as the field," dad Steve Rivers says. "I think back to when he was 6 years old in the backyard, by himself, talking and setting up cones. He didn't know it, but he was preparing himself for this."

Here's another story about the education of an NFL quarterback. During the Friday practice before the Chargers' game against Cleveland, Rivers dropped back, gave a token fake to his right, then threw a nine-yard stop pattern to receiver Eric Parker. But before the ball got to Parker, it was picked by the safety, who'd been cheating up; in a game, it most likely would have been returned for a touchdown.

Later, just before that Sunday's game, Rivers reviewed the call sheet for the first 25 plays as scripted by offensive coordinator Cam Cameron. There it was, that same play, slated for the first series. And so, on the third play of the game, the call came in to run the stop pattern to Parker. Rivers walked to the line and saw the safety creep up a little, exactly what he'd seen at that Friday practice. But this time he knew where the safety would go. He took the snap, faked right and hit Parker on the numbers for 10 yards and a first down.

Afterward, Rivers joked with Cameron, "You liked how I ran that so much you put it in the game?"

Cameron nodded and said, "That's how I knew it would work." 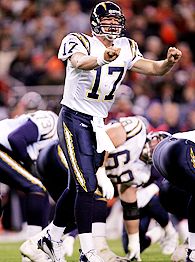 Rivers was the fourth pick of the 2004 draft, acquired by the Chargers in a trade with the Giants for the rights to Eli Manning. The usual course for a big-money rookie quarterback is to start right away, get pounded and learn from experience. But with Brees steady at the helm of a potent offense, Rivers waited. Two years seemed like forever. So when the team became his, Rivers hit the ground running. "My time has been spent trying to earn the trust of my coaches and teammates," he says. "I had to practice like a starter, and I did: in the locker room, in meetings, when I study. It's a process. I'm still earning it."

Rivers is a little like the high school guy who joins every club and plays every sport to pad his transcript. Everything he does is calculated to help himself and his team. After all, it's a long way from pumping up the scout team on Wednesday to standing on the floor of a stadium on Sunday with 68,000 people screaming in your ears, looking into the raging mug of Troy Polamalu, turning to LaDainian Tomlinson and saying, in a rolling Southern drawl, "I think I'm gonna need you right here, LT."

Like every Charger, veteran wideout Keenan McCardell could be forgiven for being skeptical about Rivers. He and Brees hooked up for 70 catches and more than 900 yards last year. And in the past two seasons, Brees led the Chargers to 20 wins, tied for fifth in the NFL. Although Rivers has taken care to bond with McCardell during occasional golf outings, it wasn't until the fifth game of this season that McCardell became a believer. The 49ers were lined up to come with an all-out blitz -- something Rivers has seen a lot this year--and there was no way McCardell would have time to complete the comeback route he was set to run.

What did Rivers see during those presnap seconds? He might have seen his life flash before his eyes, since he knew the 49ers had one more blitzer than he had blockers. So he stole a glance at McCardell, who responded with his own look that said all that needed to be said. The ball was snapped, Rivers hit McCardell on a quick slant route for a first down and the Niners' blitz died a quiet death. "If we can take a hit off him and he lives to play another day, that's beating the defense," McCardell says. "If we're all seeing the same thing in those three seconds before the snap, we get a
little jump in those three seconds after the snap."

This type of instantaneous recognition -- the lifeblood of a quarterback -- is a perfect example of how quickly Rivers has transitioned from practice player to one of the league's top-rated quarterbacks. "We dissect things in this business so much," says Chargers GM A.J. Smith. "But sometimes you need to stop yourself and say, 'This guy's a football player.' That's the case with Philip."

Against Cleveland, the game turned when the Chargers pinned the Browns at their own 2-yard line. Despite a complete inability to run the ball, the Browns decided to pile into the teeth of the Chargers defensive line three straight times, and gained nothing. On the first play after the punt, Tomlinson set off on his 41-yard TD run.

A lot happens in a football game, sure, but the story line for Chargers-Browns was basic: One team trusted its quarterback to handle those six pivotal seconds, the other didn't. Clearly, the Browns had no confidence in Charlie Frye's decisionmaking.

The Chargers' play-calling, by contrast, exhibits utmost faith in Rivers. Against Cleveland, they started four drives inside their own 15, and each time they called upon Rivers to pass them out of the hole. The last of the four led to their final score. Rivers, of course, has earned his coaches' trust with just five picks in 10 games.

Rivers is sturdy (6'5'', 228 pounds) and his strength looks more country than weight room. When he talks, he sounds the way you'd imagine a young Bill Clinton addressing the folks at a catfish festival. In fact, at times it seems that the 24-year-old, a father of three girls, is already preparing for life as a grandpa. He's an old soul, full of aphorisms and advice, who doesn't complain, works hard and drives a big pickup to work every day.

If you can't trust him, who can you trust? His teammates, led by tight end Antonio Gates, call Rivers "Coach" for the gung-ho emotional mini-speeches he's prone to giving. But it's his approach to the game--seeing the whole field and not just his place in it--that makes them follow him.

Steve Rivers has a story of his own about this. Before a playoff game during Philip's senior year in high school, the entire Auburn coaching staff showed up and stood near the field during warm-ups. One of the coaches told Steve, "Make sure you let him throw it tonight," to which Dad replied that he'd do whatever it took to win the game.

Late in the fourth, with his team ahead by 14 and the ball on the opponent's 40, Steve called a timeout and asked his son, "You want to throw?" Philip had thrown only eight times in the game, not enough to give the Auburn coaches a good look, but he recoiled at the suggestion. "Throw it? Are you kidding? We're running it down their throats."

So the coach shrugged and sent his son back onto the field to run a few more off-tackle plays. It was the right call, of course, but Steve Rivers has long known what the rest of us are just finding out: His kid's got a head for the game.

Are the Chargers better off with Philip Rivers than Drew Brees? E-mail us at post@espnmag.com.