MINNEAPOLIS -- There are five minutes until kickoff, but Chad Greenway, the first-round NFL draft pick, the multimillion-dollar future of the Minnesota Vikings defense, sits in a cushy suite behind the Metrodome's north end zone. By himself.

On the field, Greenway's purple-clad teammates, beckoned by the roar of 65,000 screaming fans, charge onto the field through an inflatable Viking ship. Watching from above, his head resting in his hands, Greenway describes his emotions in two words: "This sucks." 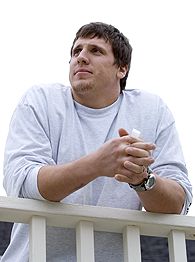 Seven months ago, the Vikings made the big-time dreams of the small-town Greenway come true, selecting the native of Mount Vernon, S.D., with the 17th overall pick in the 2006 NFL draft. Despite playing nine-man football in high school and receiving just one offer for a college scholarship, Greenway had overcome long odds to become just the third active NFL player from South Dakota.

But on Greenway's third play of the preseason opener against the Raiders, while trying to bust the wedge on kickoff coverage, his left knee buckled. He'd torn his anterior cruciate ligament, slamming the brakes on a promising rookie season.

Now, as the rest of the 2006 draft class continues to learn and improve, Greenway is left behind at the starting block, waiting for next season's race to begin.

Instead of knocking down passes, he's putting up Christmas lights. Instead of watching game film, he's watching "America's Funniest Home Videos." Instead of competing for a starting position, he's playing pingpong with his wife, Jenni. Instead of chasing NFL running backs, he jumps around his house trying to grab his bunny-quick miniature pinscher, Champ.

Every minute of every day is spent waiting -- waiting to run, to jump, to find out whether he can make it in professional football. The answers won't come soon. Donovan McNabb, Amani Toomer, Dallas Clark and other veteran players who have torn their ACLs this season -- those guys know if their knees heal, they'll be fine. They know they can play in this league. They've done it.

As for Greenway, he's nothing but unfulfilled expectations. For now.

But therein lies the problem. He can't. Not yet. Instead, he's left to compete against himself, against doctors, against any athlete who has ever injured his ACL. When doctors said he'll be able to walk on crutches in 10 days, he did it in five. When they said it would be three to four months before he received a knee brace and began doing linebacker drills, his knee was ready in two.

Every day is a battle with the trainers and the machines to push himself beyond his physical limits.

"Whatever precedents have been set before, you try to take that and move the bar," Greenway says. "In every single thing you do, you want to do it faster than anyone before you. It's the only competition you have."

Because Greenway's injury happened as early as it did, he finds himself stuck in almost a football purgatory -- too old and experienced to feel as if he belongs in college, too young and inexperienced to fit in the NFL. In a league where relationships are built on the field and in the locker room, Greenway's injured reserve, out-for-the-year status keeps him from building much of anything anywhere.

He's without the everyday locker room camaraderie many players say they miss most when they retire. Sitting on his couch, watching the Chicago Bears play the New England Patriots on a recent Sunday, he acknowledges he doesn't feel a part of the professional football league he sees on television.

"I've been relegated to the role of professional weight lifter. And next year, when camp rolls around, I'm pretty much going to be a rookie all over again."

But don't feel bad for Greenway. He won't stand for it. He's a millionaire. He has a beautiful wife. And despite a brief detour, he has every intention of living out his boyhood dream. Just not until next season.

"This is not a sob story," he insists.

The players parking lot at the Metrodome is filled with Bentleys, Benzes and BMWs. Then there's Greenway's Chevrolet. It's a white Avalanche with leather seats, a premium sound system and onboard navigation.

Those bells and whistles don't mean much. To Greenway, it's the tiny piece of plastic wrapped around the gearshift that matters. It's the hospital ID bracelet he wore during his reconstructive knee surgery in Birmingham, Ala.

Jenni wonders why Chad keeps an ID tag most people can't wait to cut off and throw away. But for Greenway, every time he puts the car in drive, he remembers how hard he worked to get here, how quickly it was taken away and how hard he must push himself to get it back.

He has been down this road before. Only last time, the stakes weren't quite as high. Just after the spring game of his redshirt freshman season at Iowa, he tore his right ACL. He missed the first four games of the 2002 season, but returned to the field, as he explains it, stronger than ever before.

But at Iowa, he knew they weren't going to take away his scholarship. He had four years to prove himself. In the NFL, that isn't the case. Although Greenway signed a five-year, $10.75 million contract, the Vikings could cut him tomorrow.

"If my career ends now, it wasn't a very good one," Greenway says. "Three plays, one tackle. But I don't plan on that happening."

That attitude, says his mother, Julie Greenway, comes from growing up on a farm. Milk some cows, feed some pigs, work the yearly bean and corn crops, she says, and you learn a few things about life.

"Things happen all the time around a farm," Julie Greenway says. "And if you dwell on it, it will come get you again and again. Chad learned that early on. He's always been able to turn a negative into a positive."

It hasn't always been easy. The night of Greenway's injury, there was plenty of time to dwell. It happened in the first quarter, so Greenway spent the rest of the game in the locker room by himself. He showered and dressed. Trainers wouldn't know more until an MRI in the morning. But he already knew. He called Jenni and his parents, all of whom were in the stadium, to tell them what had happened.

Then his mind wandered, and he began to worry. What about his contract? What if the money wasn't guaranteed? What about surgery? What about rehab? What about the house he and Jenni were supposed to close on the next morning at 9 o'clock? Should they back out of the deal?

Jenni, Julie and Greenway's agent, Marvin Demoff, eventually calmed the linebacker down. This year's salary was guaranteed. Dr. James Andrews would do the surgery. Rehab would be at the Vikings' facility. And the next morning, less than two hours after an MRI confirmed the original diagnosis of a torn ACL, he and Jenni would close on their suburban Minneapolis home.

"It was supposed to be this memorable day, our first house, but it was pretty miserable," Jenni says. "But we pulled through."

Back in the stadium suite, looking at the field below, Greenway shakes his head as Arizona running back J.J. Arrington slices through the Minneapolis special teams en route to a 99-yard game-opening touchdown.

Twenty-five feet away from the suite door is a Vikings souvenir stand and yet another reminder of what this season could have been. Hanging on a back wall is a white No. 52 Vikings jersey with "GREENWAY" ironed on the back. Price: $100.

Although Greenway consistently projects hard work and happiness, it isn't always easy. He tried traveling with the team, tried going to position meetings, but couldn't stomach being so close to the action and so far from playing. Now, he rehabs at the Vikings' facility and attends a meeting here and there, but most often watches film on his own.

He and Jenni have become friends with fellow Minnesota linebacker and South Dakota native Ben Leber and his wife, Abby. It's one of Greenway's main social outlets with the team, a way to keep in touch with the bigger picture.

Leber said the team has noticed how Greenway has worked to become a better player in 2007 than he was in 2006. And if Greenway's performance in training camp is any indication, Leber said, the young player is going to be just fine.

"He's a kid with an extremely bright future," Leber says. "I was telling my wife the other night, he must have had really good coaches at Iowa because I didn't feel I had the depth of knowledge as a rookie that he had. Plus, he is smart. Very athletic. And one of the hardest workers. You couldn't ask for much more. He is going to prove he is every bit deserving of his draft pick and status."

But for now, Greenway waits. Game days are the worst. Because he's on injured reserve, Greenway doesn't go in the locker room. He doesn't stand on the sideline. He enters the stadium through the Vikings' team offices, but walks the concourse like any other fan.

On this Sunday, shortly after Arrington's touchdown run, Greenway is joined by a couple of guys from the practice squad and a teammate on injured reserve. A friend of one of Greenway's friends has stopped by to say hello, bringing along a friend of his and his three sons.

That group leaves at halftime, only to be replaced by Greenway's aunt, uncle and some of their friends who pop by, two of whom are wearing No. 52 Vikings jerseys. Game day has become social day. Instead of dodging blockers, Greenway dodges autographs, pictures and idle conversation. He doesn't want to be rude, doesn't want to insult anyone, but deep down, you get the sense he doesn't want to be here. Watch him watch the game and, deep down, you know he wants to snap his fingers and find himself in the middle of the Minnesota defense.

When the game ends and the Vikings win, Greenway says his goodbyes and heads for his car alongside the 65,000 other fans. He tries to leave through the hallway outside the Vikings' offices, but a security guard stops him.

Wayne Drehs is a senior writer for ESPN.com. He can be reached at wayne.drehs@espn3.com.