ATLANTA -- Morten Andersen threw both hands in the air, then
leaped into the arms of his holder. 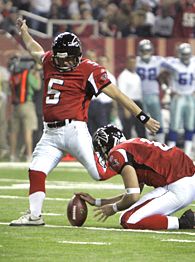 With the simplest of kicks, the Great Dane became the greatest
scorer in NFL history.

The native of Denmark has 2,437 points in his 24-year career.
Anderson held the previous record of 2,434 points.

"I hope Gary Anderson is fly fishing in Canada for a long
time," Andersen quipped. "I hope he's not coming back anytime
soon. My congratulations to Gary for setting the bar. My job is to
set it even higher."

"That's why I wanted to come back so badly. I knew I had a lot of kicks left."
-- Morten Andersen

The Danish minister of culture sent a telegram to the country's
most famous American-style football player.

"It may be a pretty big deal back there," Andersen said. "I'm
proud to be Danish. I hope they're celebrating back home tonight,
or actually this morning," considering the six-hour time
difference.

Andersen wasn't in much of a mood to celebrate, however. The
Falcons (7-7) took a devastating loss in the NFC wild-card race and
will likely have to win their final two games to have any chance of
making the playoffs.

"It's tough to talk about individual records when you lose the
football game," he said. "This is bittersweet for me. My priority
is to win the football game, and I wasn't a factor tonight."

The record-breaking kick came with 6:30 left in the second
quarter, after Michael Vick threw a 9-yard touchdown pass to
Michael Jenkins to pull the Falcons within 14-13.

Andersen trotted on the field as he's done so many since
entering the league in 1982, setting up for the chip-shot of an
extra point from 20 yard away. As soon as the ball went through the
uprights, the celebration was on.

The kicker thrust both arms toward the roof of the Georgia Dome
before jumping into the arms of holder Matt Schaub. Andersen
received a standing ovation from the crowd as he trotted toward the
sideline, where he was mobbed by coach Jim Mora and the rest of the
team.

The previous week at Tampa Bay, Andersen tied another of
Anderson's records with his 538th career field goal.

Andersen signed with the Falcons before Week 3, becoming the
second-oldest player in NFL history behind George Blanda. The
Atlanta kicker had made 538 of 679 field-goal attempts and all but
10 of his 832 extra-point tries.

In the days leading up the game, Andersen refused to discuss the
record. He said there was nothing to talk about until he got the
mark.

But Andersen admitted that setting the record was one of the
reasons he kept working out, even while missing the entire 2005
season because no team offered him a job. He also wants to win his
first Super Bowl championship and become the league's oldest
player.

Blanda played until he was 48.

"My next goal is to play until I'm 50," he said. "It's a goal
I'm serious about. I know people snicker at it. They've been
snickering at it for 10 years now. But if I can play at a high
level and stay healthy, I think I can do it."

While he no longer has the leg strength of his prime, the
left-footed kicker has been an accurate weapon for the Falcons. He
has made 18 of 21 field goals, and pushed his perfect mark on extra
points to 25 in a row.

"I'm proud of everything," he said, "but it's bittersweet."