There are questions that must be answered every Sunday. We asked our experts for their opinions on the five Burning Questions coming out of Week 15. Also, we want to know what SportsNation thinks.

1. With so many good-to-great teams in the AFC, is the stage set for another AFC victory in the Super Bowl?

Eric Allen: Let's not get ahead of ourselves here. Sure, the AFC looks like the much stronger conference right now, but as we all know, playoff football is an entirely different monster than regular season football. Last season at this point, no one thought the Pittsburgh Steelers would be the Super Bowl champs. Is the AFC the better conference right now? Yes, but the NFC can still prevail in the ultimate game.

Joe Theismann: The number of good-to-great teams in the AFC may end up being a contributing factor to why the AFC won't win the Super Bowl. The team that emerges from the AFC will have gone through at least two dogfights in the playoffs and will be beaten up and scarred. It's impossible to think the winner won't be tired and possibly injured, which could actually make the NFC champion the favorite in the Super Bowl.

2. Why are the Jaguars so inconsistent?

Allen: I don't know why this Jaguars team is so inconsistent. They have the talent to play with any team in the league and to dominate lesser teams, but too often they play poorly when they need to win. My thought is that this team is still young and inexperienced at the key positions and they are still learning to win the games they are supposed [to win]. They don't know how to handle the ups and downs of the NFL season.

Theismann: There is no excuse for the Jaguars to spank the Colts, 44-17, one week and then lay an egg the next week against a Titans team they should've beaten. I think this is a matter of a team reading its own press clippings and believing what it's reading.

3. Is the Bengals' defense for real or just a mirage?

Allen: How quickly we forget how good the Bengals' defense was last season when the players played an opportunistic, ball-hawking style. They caused fumbles, made interceptions and wreaked havoc for opposing quarterbacks. The Bengals led the NFL in forced turnovers last season with 43. Earlier this season, we didn't see that, but now we're starting to see that mind-set return to the Bengals and that's why they are for real.

Theismann: My first thoughts are that this defense is for real. But I'm going to hold off on emphatically stating that until after I get to watch them in person against the Colts. This is going to be a really good test for them because the Colts are such a balanced squad. If they can hold the Colts to under 25 points, then they are for real.

4. Now who's the prime challenger for the Bears in the NFC?

Allen: This could change next week, but for now the main challenger is the Dallas Cowboys. The Cowboys don't have the defensive issues that seem to occasionally plague the Saints. While the Saints were able to post 42 points on the Cowboys, the Bears don't have the type of offense to do that. 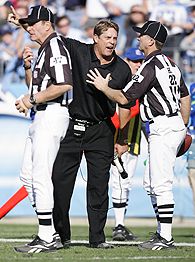 Allen: Matt Leinart is in the best position because he has great offensive talent around him in Arizona. He has two of the best receivers in the game (Larry Fitzgerald and Anquan Boldin) and both are under 27. Also, he has Edgerrin James running the ball behind him, and Edge will get better after his disappointing first season with the Cardinals.

Theismann: Philip Rivers is a rare talent and will be the guy we point to as the best 10 years from now. He has that confidence you see from all the great quarterbacks, and he backs it up with intelligence, a tremendous arm and decent mobility. He's the guy.