NEW YORK -- Vince Young looks as if he'll make the NFL his
personal playground, too. 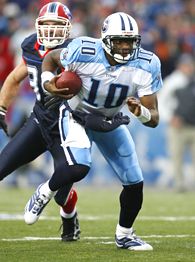 The dynamic quarterback for the Tennessee Titans won The
Associated Press Offensive Rookie of the Year Award on Wednesday.
He did it in the same fashion he turned around the Titans' season --
running away from the rest of the field.

Young, who led Texas to the 2005 national championship and was
the third overall pick in last April's draft, overwhelmed one of
the strongest rookie classes in NFL history. He received 23 votes
from a nationwide panel of 50 sports writers and broadcasters who
cover the league.

Running back Carnell "Cadillac" Williams of Tampa Bay won the
award last year. Young is the third member of the Tennessee-Houston
franchise to take top rookie honors: Earl Campbell in 1978 and
Eddie George in 1996 did it for the Houston Oilers.

Young was the catalyst in Tennessee's rally from 0-5 to 8-8, at
times looking as unstoppable for the Titans as he did with the
Longhorns. A starter from Week 4, Young sprinkled all kinds of
spectacular big plays with a growing maturity in joining Ben Roethlisberger (2004) as the only quarterbacks to win top rookie
honors in the 49-year history of the award.

He became the first rookie quarterback to rush for more than 500
yards in the Super Bowl era, and his passing skills improved all
year under coach Jeff Fisher and offensive coordinator Norm Chow.

"I like to go out there and play the game and show that I can
deliver the ball down the field, and that I can use my legs at the
right time, when it's time to use my legs, and checking the ball
down, just being a quarterback," Young said. "I want to change
the game a little bit."