You can't clock a brain in the 40. Film can break down a golfer's swing to its tiniest arc, a yardstick can determine a basketball player's vertical leap. But neither guarantees a Tiger Woods or a Michael Jordan. Because, really, it's the brain that makes the athlete, and, maddeningly, there is no stopwatch that measures smarts.

So instead, we guess. We poke, we prod. We pretend we know what's inside an athlete's head and how it affects the way he or she performs.

Rex Grossman is familiar with this cranial fascination. Over the past few months, no other athlete has had as many unsolicited offers to diagnose his psyche. At one point, Grossman felt less like the Bears quarterback and more like a medical experiment; it's a wonder no one showed up at his door with a portable CAT scan machine. Of course, Grossman is the first to admit that if he'd been watching himself this season, he'd be wondering what's going on between his ears too. "But that's something you have to work out yourself," he says. "Besides, it's scary in there."

Albert Einstein's brain weighed nearly three pounds; that's relatively average. But scientists studying his legendary gray matter after his death found that the section that processes math was about 15% bigger than normal. There is no comparable research on any athlete's brain, but if jocks have a bravado lobe, Grossman's is certainly enlarged.

Since second grade, Grossman's believed that there is very little, if anything, that he cannot do with a football. This confidence was born when he scored a touchdown the very first time he took the field in an organized game, and it held firm at Florida. He remained unbowed even by Steve Spurrier, who, as current Bear and former Gator Todd Johnson puts it, "could yell a bit." But Grossman never showed any fear, Johnson says, "and you never saw him back down. He has a mental strength people don't realize."

This might explain why Grossman was able to withstand the psychiatric evaluation administered by the city of Chicago at the midpoint of the season, when he went through a stretch of games that even he refers to as "my slump." He started looking shaky in a mid-October win against the Cardinals when he threw four picks. He was not much sharper in November losses to the Dolphins and Patriots.

The real misery, though, came against the Vikings in early December; Grossman finished with a 1.3 passer rating, the lowest by a winning quarterback in 35 years. His biggest mistakes were mental, and for the next week, everyone within a 100-mile radius of Soldier Field seemed to have an opinion on how to fix his head. The worst, Grossman says, were the people who would simply tell him, "You'll get through it."

"It was the guy next to me pumping gas, the flight attendant," he says. "Everyone has great intentions, but I knew what they were really saying: 'You're playing like crap.' "

Through it all, Grossman's groomed-from-age-7 confidence kept him from folding into a jumble of nerves -- although even he had his limits. Friends stopped using the word interception around him, and watching or reading anything about sports was banned in his house. Instead, Grossman spent his nights watching old episodes of 24 and movies like Talladega Nights, Mission: Impossible III and White Chicks (twice). 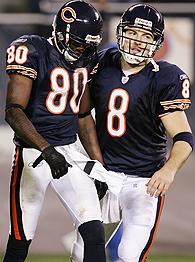 Grossman did return to football during the day, but only at practice and in the film room. His aha! moment came during a screening of the game against the Vikings: Six minutes into the first quarter, Grossman was supposed to find Muhsin Muhammad steps from the end zone. But lining up for the play, he saw Vikings corner Antoine Winfield in coverage and remembered that Winfield had jumped a similar route against Miami earlier in the season. When the ball was snapped, Grossman was so spooked by that memory that he didn't even consider Muhammad -- who was wide-open -- and instead overthrew Desmond Clark.

As the image flickered across the screen, Grossman realized how much his head was getting in the way of his arm. He got out the spiral notebook he carries around Halas Hall and started to make a list of instructions to himself. The most prominent? "Read and React. Just play."

"I learned you have to use your preparation, but don't let it dictate how you play," he says. "Also, you have to approach each play with a clear mind. Step into the huddle and start fresh."

Seven days after the Minnesota game, Grossman sat in a hotel room in St. Louis, knowing the next night's game, against the Rams, would determine whether he'd hold on to his starting job. He turned to Johnson, his road roommate, and compared his future to a craps game. "Well, my man, I got the chips stacked high," he said. "I'm going to have to go out and have a good shoot."

He did. Grossman was pick-free against the Rams, throwing two touchdowns as he racked up a perfect passer rating in the third quarter.

DURING A weightlifting session, an athlete breaks down muscle. Over the next few days, the muscle heals and the fibers come back stronger. In many ways, Grossman's entire season has been a trip to the mental gym. He says everything he's gone through has made him psychologically stronger for what lies ahead, even the seemingly tight margin for error he'll face in the playoffs, where a slow start could lead to a quick hook in favor of backup Brian Griese.

Of course, Grossman is talking about his brain, so there's no true way of knowing how much he's improved, at least not by stopwatch or yardstick. Still, the postseason is upon us, and there's no doubt that, as much as we talk about arm strength and blitzing schemes, it's the brains that will rule the next few weeks.

And there will, in fact, be one way to measure them: by the scoreboard.