DAVIE, Fla. -- When he was recruiting for Michigan, Cam
Cameron could find any high school in South Florida without using a
map.

"It's not that far from home," Cameron said. 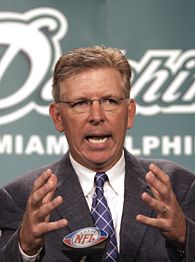 Now, it is home -- his new home with the Miami Dolphins.

Cameron will try to succeed where Nick Saban failed. Cameron
signed a four-year contract Friday and left his job as offensive
coordinator of the San Diego Chargers to become the Dolphins' fifth
coach since Don Shula retired in 1995.

Cameron was one of at least 13 candidates to interview with the
Dolphins over the last two weeks.

"He definitely is committed to winning ... and we are committed
to winning, whatever it takes, whatever it costs, we want to win,"
owner Wayne Huizenga said. "He wants to win and he wants to be
successful. He has the same driving passion that we do."

That's what Huizenga thought when he hired Saban two years ago.

Saban left for Alabama after a 6-10 season and missed the
playoffs in both years with Miami. He left behind an aging defense
and a feeble offense.