What a great honor to be inducted into the Hall of Fame. I'm particularly happy for Michael Irvin. This is the first Hall of Fame class that I was eligible for and it's great to see my contemporaries, guys who I sweated and bled to try to stop on the field of play, get the greatest honor a professional football player can receive. 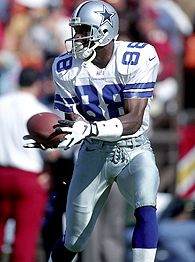 Lost in all the talk concerning Irvin's candidacy over the past two years was the fact that he was not only a great player, but also a great teammate. He was the fire on those great Dallas Cowboys football teams. Sure, he talked big before the game, during the game and after the game, but he always backed it up. He was one of the hardest receivers I ever had to face because of his intense preparation, physical skills and his desire to be the best. There was never any doubt in my mind that if I made a mistake covering him that he would make me pay. He was an extremely smart player who didn't receive the credit he was due for that part of his game.

Another person who I'm extremely glad to see get in is running back Thurman Thomas. I didn't play against Thomas nearly as much as I did Irvin, but I have the utmost respect for his game. I'm sure when he was told that he was headed to the Hall his mind went straight to the 1988 draft when he was passed over by many teams until finally being drafted by the Buffalo Bills in the second round. Now he is in the Hall of Fame and is being recognized as one of the greatest running backs who ever put on a helmet.

Backs like Marshall Faulk and Reggie Bush owe a lot to Thomas. He was the first running back to truly show NFL teams how dangerous a back could be consistently catching the ball out of the backfield. That's one reason why we now have so many teams that don't overlook smaller running backs in the draft.

Of course, the Hall of Fame is about recognizing truly great and transcendent players and ambassadors of the game. That's why I'm truly surprised that Washington Redskins receiver Art Monk and former NFL commissioner Paul Tagliabue didn't make it into this year's class.

Monk and Irvin are very similar in their styles. What made Monk so great on the football field was how he used his big frame just like Irvin. What I think is ultimately hurting Monk is that he played with wide receivers Ricky Sanders and Gary Clark. While having those two receivers on his team helped him win Super Bowls, it's hurting him as he attempts to make the HOF because he had to share receptions. Monk was a chain mover and you knew if it was third-and-short that he was getting the ball. He deserves to be in the Hall.

Tagliabue having to wait another year is truly baffling because he put the league back on top of the sports landscape. There was a time when there was serious friction between the players and the ownership and the NBA was thought to be the premier professional league. He repaired the division between the players and ownership and through great leadership helped take back the No. 1 spot as the best league. He did an awesome job and will be inducted into the Hall one day.