Bears defensive coordinator Ron Rivera, who has interviewed for nine head coach positions in the NFL over the past two years but landed none of them, will not return to Chicago. 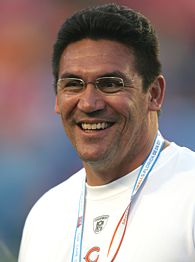 Negotiations between Bears officials and Rivera's representatives, aimed at extending the coach's contract, have produced no progress toward a new deal and have broken off. ESPN.com's John Clayton reported on Monday night that Rivera had in fact accepted a position as linebackers coach on the staff of new Chargers coach Norv Turner.

"I believe this is just a football decision and it was made," Rivera said. "Emotionally, I'm disappointed in not getting the opportunity to
come back in '07 because as I said at the end of the year after the
loss that this is a football team that's headed in the right
direction."

Rivera's contract had technically lapsed. But according to league rules the Bears had an exclusivity period, for three Tuesdays following the Super Bowl, to negotiate a new deal with him. During that three-week window, Rivera could have been hired as a head coach by another franchise, but not as an assistant.

That window expires Tuesday, and sources said Bears officials had no intention of renewing Rivera's contract. It is believed that Rivera, who played linebacker for the Bears for nine seasons before embarking on a coaching career, earned $500,000 for the 2006 season. If that is the case, it likely put him at about the middle of the NFL's salary range for defensive coordinators.

Given the popularity of Rivera during the NFL's past two firing-and-hiring cycles, when he interviewed for eight head-coaching vacancies, his step back to a position coach would be fraught with irony. Still, team officials indicated to ESPN.com during the week preceding Super Bowl XLI that they would not overpay to retain Rivera.

"It's been my goal all along to help Ron, to do everything I
could to get Ron an opportunity to get a head football coaching job
and it's no more than that. We've tried to do that. Ron had a
contract. I don't see it as a firing or anything like that. His
contract expired and he wants to go in one direction, and I'd like
to go in one. No more than that. "

The feeling then was that Chicago could survive Rivera's departure, since their defense is primarily the design of head coach Lovie Smith. The Bears also felt they had a replacement on staff already in assistant coach Bob Babich. The Bears' linebackers coach, Babich is highly regarded and, assuming Rivera departs, he will be elevated to the coordinator post.

A Chicago official noted before the Super Bowl that the Bears would be in worse shape if another club pursued offensive coordinator Ron Turner, since there was no heir apparent on the current staff.

The Bears have been negotiating new contracts for general manager Jerry Angelo and for Smith, but are not believed to be close to a deal for the latter. Smith was believed to be the NFL's lowest paid head coach in 2006, with a salary of $1.35 million, and has one season remaining on his original contract with the club.

Rivera, 45, played for the Bears 1984-92, then became an assistant coach on the Chicago staff in 1997. He moved to the Philadelphia Eagles in 1999, then rejoined the Bears, on Smith's staff, in 2004. Of the seven head coach openings since the end of the 2006 season, the only one for which Rivera did not interview was the Oakland vacancy.

"The timing sometimes could have been better or it could have
been worse. It is what it is right now," Rivera said. "It's just
something that's happened and I'm going to go from there."

Len Pasquarelli is a senior writer for ESPN.com. The Associated Press contributed to this report.