The NFL staff has identified plays or events that may have altered the course of history. Each Tuesday and Saturday throughout the offseason, we will be tackling a different scenario and speculate on how things might have gone differently.

John Elway's name is virtually synonimous with the city of Denver, where he played his entire career, but it almost didn't end up that way. Well before Eli Manning refused to play in San Diego, it was Elway who pulled the ultimate power play. 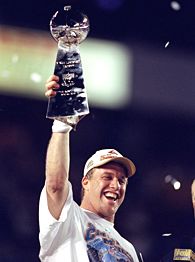 After a remarkable college career, in which he set nearly every Stanford and Pacific-10 career record for passing and total offense, and finished second in Heisman Trophy balloting as a senior, Elway was regarded as the top prospect in the 1983 NFL draft.

The Baltimore Colts owned the top pick and looked poised to land a quarterback capable of building on the remarkable legacy set by John Unitas, but Elway had different ideas. First, he publicly stated he refused to join the Colts, feeling the team would not allow him to be successful, then, after Baltimore selected him anyway, he demanded a trade.

Interestingly enough, his leverage came from his ability to play baseball. Elway batted .361 at Stanford and had been drafted by the New York Yankees back in 1981. By the time the football draft rolled around, he had spent two summers with the organization, and threatened to devote himself to basebal fulltime.

Eventually, Colts owner Robert Irsay gave in. The Colts traded Elway to the Broncos for QB Mark Herrmann, rights to OL Chris Hinton and a first-round pick (OG Ron Solt) in the 1985 draft on May 2, 1983.

Elway went on to become arguably the greatest quarterback in NFL history, but the question remains. What if the Colts had called John Elway's bluff in 1983? Was Elway really prepared to go play baseball with the Yankees? How would his career as a football player have gone differently in Baltimore?

Mailbag: What if the Colts had called John Elway's bluff? Send in your comments and we will post some of the best responses.