Just one day after Jake Plummer said he would retire rather than relocate in a trade, the Tampa Bay Buccaneers recovered, reaching an agreement with unrestricted free agent Jeff Garcia on a deal that could allow the veteran to again challenge for a starting job in the league. It proved to be a good move, as Plummer formally announced Saturday night on his foundation's Web site that he was retiring. 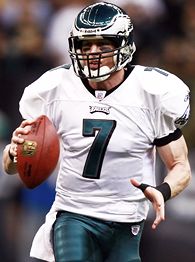 "Football has been awesome to me in many ways. I leave the game
with my health and happiness, and look forward to the future,'' he said on the Web site.

Garcia quickly became the Bucs' primary target on Friday after Plummer, who has played the past four seasons in Denver but lost his job to rookie Jay Cutler last year, decided that he did not want to join the Bucs. Tampa Bay would have surrendered a fourth-round draft pick to the Broncos under terms of the preliminary trade agreement.

Tampa Bay officials, including coach Jon Gruden, attempted on Friday to persuade Plummer to reconsider and accept the trade, but he held firm. So the Bucs, convinced that they could not resurrect the deal for Plummer and still seeking a veteran quarterback to compete with Chris Simms for the starting job, turned their attentions to Garcia.

While terms of the contract were not yet available, Garcia's two-year contract will pay him about $5 million a year, according to ESPN.com's John Clayton,

The opportunity in Tampa Bay is a good one for Garcia because of Gruden's feelings for him, and the fact the Bucs are not yet ready to hand Simms the No. 1 job. Simms is coming off a season in which he underwent a splenectomy, missed much of the campaign and has been forced to spend months in rehabilitation.

Plus, Gruden is a coach who simply loves to collect quarterbacks and always feels that his depth chart is never stocked well enough. Garcia has played in the past in offenses that are similar to the design Gruden uses, so the fit should be a solid one for all parties involved.

Stepping away from the game couldn't be further from the 37-year-old Garcia's mind.

"I'm somebody who is excited about this opportunity, who's
excited to be around the guys and bring a good mix of leadership
and drive and will and perseverance -- all those things you need in
order to turn the corner and get back that winning feeling, that
winning tradition."

Garcia also was sought by several other teams, including Denver and the Oakland Raiders.

Meanwhile, general manager Bruce Allen acknowledged the Bucs did end up trading a conditional pick in the 2008 draft for Plummer, even though they were aware the quarterback was thinking about not playing again.

Part of the rationale in completing the Plummer deal, after it had fallen apart, was that Denver coach Mike Shanahan did not want the quarterback to un-retire in a few months and attempt to sign with another team. League sources had speculated that the Broncos suspected Plummer might attempt to join the Houston Texans, where former Denver offensive coordinator Gary Kubiak is the head coach.

By trading Plummer's rights to the Bucs, even for a conditional draft choice, the Broncos forced his hand. If Plummer changes his mind and decides to play in 2007, he can not sign anywhere he wants, because Tampa Bay now technically has been assigned his existing contract.

The only potential risk for the Bucs is that, if Plummer does decide to play, Tampa Bay becomes responsible for his 2007 base salary of $5.3 million.

Last week, the Philadelphia Eagles closed the door on Garcia's return there when they signed A.J. Feeley to a three-year contract extension. The move was somewhat surprising, given that Garcia posted a 5-1 record and led the Eagles to a playoff berth after replacing the injured Donovan McNabb.

Under the right circumstances, Philadelphia probably would have welcomed Garcia back for another season, but only on its conditions and on its timetable. His reluctance to re-sign with the Eagles before the outset of free agency solidified the desires of some within the organization to pursue Feeley instead, and to essentially make him the No. 2 quarterback on the depth chart.

All along, though, Garcia and agent Steve Baker knew they would have alternatives beyond the Eagles, and the Plummer situation simply created another option for them.

"Jeff feels he has multiple good options, but the opportunity to play for Jon Gruden in Tampa is something that really excites him," Baker said on Friday afternoon. "Jon is a coach who Jeff believes has the ability to bring out the best in him. In fact, he feels that by playing for Jon, he has a very good chance of duplicating the success he had with the Eagles in Philadelphia last year."

A three-time Pro Bowl performer, but a quarterback nomad since 2003, his final season with the San Francisco 49ers, Garcia is joining his fourth different franchise in four seasons.

Len Pasquarelli is a senior NFL writer for ESPN.com. ESPN.com senior writer John Clayton and The Associated Press contributed to this report.