DALLAS -- Wilford "Crazy Ray" Jones, the boisterous Dallas Cowboys fan who energized crowds for decades with his cowboy getup and sideline cheerleading, died Saturday. He was 76. 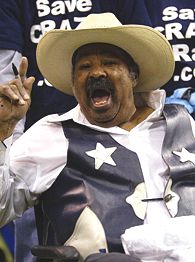 Jones died at his home, said Tracy Moberly, a friend of the family. Diabetes and cardiovascular disease were listed as the causes of death, according to the Dallas County medical examiner's office.

Though he was not paid by the Cowboys, he was given a special parking space at Texas Stadium and granted all-access at home games.

"He touched thousands of lives and generations of football fans," Cowboys owner Jerry Jones said on the team's Web site. "He will remain an important part of this team's heritage and family for as long as fans go to Cowboys games and feel his spirit."

"Crazy Ray" Jones, who had a leg amputated in 1997, had battled ailing health in recent years, including five heart bypasses and a stroke. Friends had set up a Web site -- www.savecrazyray.com -- seeking donations to help the family pay for medical and utility bills.