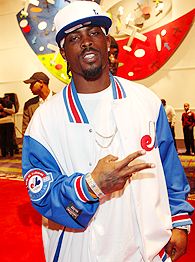 Vick came under scrutiny in January after police said the seized
water bottle smelled of marijuana and had a secret compartment, but
lab tests found no evidence of drugs. Speaking publicly for the
first time since the incident, the Atlanta quarterback said the
bottle was a hiding place for earrings and jewelry.

"I have had that bottle for years, for a long time," Vick told
reporters gathered for the Falcons' announcement about the trade of
Matt Schaub, Vick's backup.

"If you had seen the bottle, you would have never known there
was any jewelry in there," he said. "I have had things stolen out
of hotels. But I had never checked it through the airport."

The Miami-Dade Police Department disagreed with Vick's description of the situation.

"That's the first we've heard of that," Detective Nelda Fonticella, spokeswoman for the Miami-Dade Police Department, told the Atlanta Journal-Constitution when asked if Vick was carrying jewelry in the bottle. "If he has any kind of problem with the way things were handled, then he needs to talk to internal affairs."

According to the newspaper, no documents related to the incident had any mention of jewelry, including the police report and the Florida state attorney's case memo.

In the trade for Schaub, Atlanta swapped first-round picks with Houston and acquired second-round picks in the next two drafts by dealing the backup QB to the Texans. The Falcons now have the eighth overall pick in this year's
draft.

The trade signals to Vick that the starting quarterback job is
his, but general manager Rich McKay said that was not the reason
the trade was made.

"As a restricted free agent, this was the year if we were going
to be involved in a move [involving Schaub]," McKay said. "After
this year he was going anyway."

Vick said he was excited about playing under new coach Bobby
Petrino, who he met shortly after the water bottle was seized in
Miami.

"That was the first day I had to walk in and meet him," Vick
said. "I had to go through that with him, and he brushed it off,
and we talked about family and football and what I needed to do to
get ready. That was very uplifting to me."

Vick said he did not speak out at the time because he felt
everyone had rushed to judgment.

"Nobody wanted to listen to me," he said. "I was under the
microscope. I didn't do anything wrong and people wrote this and
said that. They didn't know the story. When it came back that I was
cleared, they said all this and knocked me down and kicked me
around. Everything was false.

Vick said he cooperated at the airport and throughout the
process.

"We went through all of this because there was a little water
at the top," Vick said. "I told them it was my stash box for
jewelry. That is what I told everybody, but that wasn't written.

"As for the smell and where that came from, I sat in the
airport for another hour and 30 minutes. If there was something
wrong, we could have handled the situation on the spot."

Vick threw for 2,474 yards and 20 touchdowns, and became the
first NFL quarterback to top 1,000 yards rushing in a season last
year, but the Falcons finished 7-9 and missed the playoffs. He
expressed enthusiasm Thursday for Petrino's new offense and the
coach's statement that he'll be allowed to audible at the line.

"It says a lot for him that he came in here and didn't say he
was going to gradually work me into calling my own plays," Vick
said. "He is going to let me do it."