DENVER -- Al Wilson's new agent confirmed Thursday night that the Denver Broncos are shopping around for a trade partner but that a deal for the star middle linebacker isn't imminent.

The NFL Network reported Thursday that talks with the New York Giants have heated up after the Detroit Lions and Philadelphia Eagles showed strong interest. 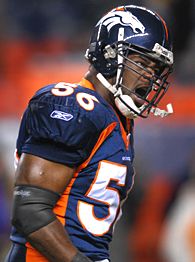 "It's a little premature. There are a number of teams that are interested in Al -- Al is a player who is definitely in high demand -- but no decision has been made even whether Al will be traded," Denver-based agent Peter Schaffer told The Associated Press. "There's a number of moving parts. We're just going to take it one move at a time."

The Broncos, whose policy is not to discuss personnel matters in the offseason, could move D.J. Williams inside to replace Wilson, an eighth-year pro from Tennessee who was selected to his fifth Pro Bowl last season.

Schaffer has worked to try to facilitate a trade for Wilson, who is due $5.2 million in base salary next season, since the linebacker switched agents last week. Schaffer said he wants to make sure Wilson winds up in the best situation, whether that be in Denver or elsewhere.

"The Giants have expressed interest," Schaffer said. "We're exploring all options. We want to make a decision that's best in Al's short-term and long-term interests."

Wilson had a team-best 113 tackles last season, including 88 solo, with five sacks, a forced fumble and six pass breakups.

A fan favorite, Wilson also is a locker room leader and elder statesman on the team. He spoke at the funerals of cornerback Darrent Williams and running back Damien Nash this offseason, two teammates who died at age 24.

The Broncos have committed big bucks to several free agents this month and might want to free up money by dealing Wilson, a player who would command a high return.

"He's had a wonderful run here -- and I'm not by any means saying that run is over. It may continue."