Darryl Stingley spent more than half his life in a wheelchair, a symbol of the violence of the NFL, where large bodies collide at high speeds on every play. 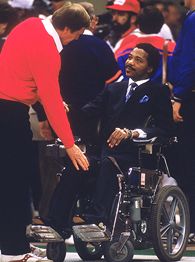 He was only 26 when he clashed head-on with the Raiders' Jack Tatum during an exhibition at the Oakland Coliseum as they leaped for a pass.

That play has haunted the NFL for nearly three decades.

On Thursday, the after-effects of Stingley's grievous injury finally took his life at age 55.

He was pronounced dead at Northwestern Memorial Hospital after he was found unresponsive in his Chicago home, according to Tony Brucci, an investigator with the Cook County medical examiner's office.

"I am deeply saddened by the death of Darryl Stingley," Tatum said in a statement released by the Raiders. "Darryl will be forever remembered for his strength and courage. My thoughts and prayers go out to his family."

Stingley was a star receiver with the New England Patriots when he collided with Tatum on Aug. 12, 1978. With one jolt, his life was forever changed. His neck was broken; he was left a quadriplegic. In time, he regained limited movement in his right arm and was able to operate his electric wheelchair on his own.

"I have relived that moment over and over again," he said in a 1988 interview with The Associated Press. "I was 26 years old at the time and I remember thinking, 'What's going to happen to me? If I live, what am I going to be like?' And then there were all those whys, whys, whys?

"It was only after I stopped asking why, that I was able to regroup and go on with my life," he said.

His death instantly rekindled the debate over the circumstances of the accident.