The NFL staff has identified plays or events that might have altered the course of history. Each Tuesday and Saturday throughout the offseason, we will be tackling a different scenario and speculate on how things might have gone differently.

Backup quarterbacks are told to always be prepared, for they are only one snap away. But Tom Brady could have been forgiven for ignoring the advice. A sixth-round pick out of Michigan in 2000, Brady had done well to even make the Patriots' roster his rookie season, and work his way up to second on the depth chart the following training camp. 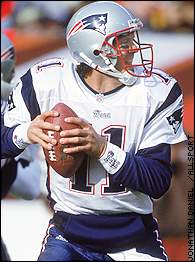 Playing behind Pro Bowler Drew Bledsoe, one of the most durable quarterbacks in the league, Brady was unlikely to see significant playing time in 2001. But that all changed in Week 2, when Bledsoe was drilled by New York Jets linebacker Mo Lewis as he ran upright trying to make it out of bounds.

The hit caused Bledsoe to suffer internal bleeding, leading to a change at quarterback, and, ironically, the begining of the Patriots' championship run. Brady displayed so much composure in his first few starts, when Bledsoe finally returned, he was the one relegated to the sideline.

Brady capped off an improbable season by leading the Patriots on a game-winning drive against the Rams in Super Bowl (XXXVI). His success made Bledsoe so expendable, the nine-year veteran was dealt to divisional rival Buffalo following the season.

Brady has added two more Super Bowls to his collection (XXXVIII, XXXIX), winning a place in the hearts of all New England fans. But it is worth remembering that place once belonged to Bledsoe, and it's also fair to wonder how long things might have stayed that way, had it not been for one vicious hit.