Having watched their offense sputter under the direction of a pair of journeymen veterans during a three-day weekend minicamp that concluded on Sunday, the Miami Dolphins are expected this week to ramp up their efforts to complete a much-discussed trade for Kansas City Chiefs quarterback Trent Green. 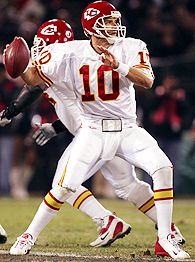 Citing unnamed sources, the South Florida Sun-Sentinel reported that the trade could be completed this week, which would likely lead to the release of Daunte Culpepper, who was unable to participate in the minicamp as he continues recovering from knee surgery. League sources told ESPN.com that officials from the Dolphins and Chiefs, who have been talking about the trade for more than a month, recently resumed negotiations.

The teams are said to have moved closer to agreeing on compensation in the proposed deal. Kansas City has been seeking a second-round draft choice for Green, while Miami officials would prefer to surrender a late-round selection. The aim is to consummate a trade before the April 28-29 draft.

In the absence of Culpepper, the Dolphins relied on quarterbacks Cleo Lemon and Gibran Hamdan, untested players with one regular season start between them, in the weekend's initial minicamp under first year coach Cam Cameron. Not surprisingly, both the players struggled to move the offense.

Even before the minicamp, the Dolphins had renewed their pursuit of Green, but the poor performance of the offense over the weekend may have added further impetus to complete a trade that would provide Miami a proven starter.

Green, 36, has been deemed expendable by the Chiefs, who plan to allow veteran Damon Huard and second-year pro Brodie Croyle to compete in training camp for the starting job. A 14-year veteran, Green has six times thrown for 3,000-plus yards in a season and has three seasons of 4,000 or more yards. He has completed 2,143 of 3,527 passes for 26,963 yards, with 157 touchdown passes and 101 interceptions in 112 games, including 107 starts.

Until last season, Green had proven incredibly durable, and had started every game for the Chiefs since Kansas City acquired him in a 2001 trade. But Green suffered a severe head injury in the 2006 season opener, when he was hit outside the pocket by Cincinnati end Robert Geathers, and he started only eight contests.

There have been other teams which have indicated an interest in Green, the Detroit Lions and Cleveland Browns among them, but the veteran has emphasized that his preference is to be traded to Miami, where he would be reunited with Cameron, his former quarterbacks coach with the Washington Redskins from 1995-96.

Green controls his fate to some extent, since any team that acquires him will want him to restructure a contract that has three seasons remaining, at base salaries of $7.2 million (2007), $7.7 million (2008) and $9.2 million (2009). The Dolphins and Green's agent have already agreed on the key parameters of a contract that addresses the needs of both sides.

The potential acquisition of Green, coupled with his own battle to come back from the catastrophic right knee injury he suffered in October 2005, an injury in which he tore three of the four ligaments, has left Culpepper in limbo. The eight-year veteran was supposed to answer the Dolphins' long standing quarterback issues when the club acquired him from Minnesota last spring.

But Culpepper appeared in only four games before undergoing a second surgery to repair his knee. He revealed over the weekend that the second surgery, which was designed to address scar tissue in the knee, was more serious than anyone originally divulged, and called for a rehabilitation period of 4-6 months.

There is no timetable for the return of Culpepper, 30, who is scheduled to earn a base salary of $5.5 million in 2007. It's conceivable that the Dolphins will have completed a trade for Green, and jettisoned Culpepper, before he is actually ready to return to the field.

Beyond the discussions aimed at adding Green, the Dolphins have explored other options, including the possibility of investing a high round draft choice in a quarterback. Cameron and general manager Randy Mueller have met with or auditioned each of the top four quarterback prospects in this year's draft.

Len Pasquarelli is a senior writer for ESPN.com