In a move that could leave the Indianapolis Colts without either of their starting cornerbacks from the 2006 season, restricted free agent Jason David on Thursday afternoon signed an offer sheet with the New Orleans Saints. 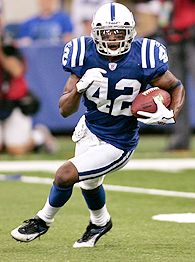 The offer sheet is for four years and, while financial details were not immediately available, the early suspicions are that the deal is structured in such a way that will make it difficult for the Colts to match. It is not known if the offer sheet includes a so-called "poison pill," but the contract is expected to be significantly frontloaded.

The Colts lost their other starting cornerback, six-year veteran Nick Harper, when he signed with Tennessee last month as an unrestricted free agent. Indianapolis retained a right of first refusal on David by making him the low-level qualifying offer of $850,000. In hindsight, that offer might have been too low, given the three year's veteran's importance to the club, and the fact the low offer may have invited suitors.

The NFL deadline for signing restricted free agents to offer sheets is Friday at 11:59 p.m.

New Orleans has been attempting for two years to upgrade at cornerback, and David is a young, emerging player who can certainly aid the Saints' secondary. Clearly, the Saints, who own three picks in the fourth round of next week's draft, feel that the compensation for a player like David is more than palatable.

In three seasons with the Colts, David has appeared in 48 games, all as a starter. The former Washington State standout, a fourth-round pick in the 2004 draft, has eight interceptions, 26 passes defensed, 147 tackles, one forced fumble and three recoveries. He was a solid fit for the Colts in their Tampa-2 style defense.

Colts officials figure to be very deliberate in studying the David offer sheet before they arrive at a resolution on how to handle it. While David is a key player for the Colts, the defending Super Bowl champions are not a franchise prone to panic. Having to develop two new starting cornerbacks for 2007 may be a daunting challenge, but the Colts, more so than any team in the league, trust their drafts to produce replacement players for them.

Len Pasquarelli is a senior writer for ESPN.com