Throughout the offseason, we'll catch up with former NFL players and coaches to found out what they have been up to since leaving the game.

John Taylor fulfilled the dream of many little kids -- scoring the winning touchdown in a Super Bowl. Now, the man who caught a 10-yard pass from Joe Montana with 34 seconds left in Super Bowl XXIII, giving San Francisco a 20-16 victory over Cincinnati, is blazing a new path in life. 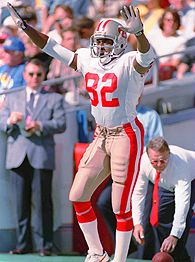 A third-round pick out of Delaware State, Taylor might have played second fiddle to Jerry Rice in the 49ers' offense, but he certainly left his mark on the game, earning two Pro Bowl selections (1988-1989) and three Super Bowl rings.

In nine NFL seasons, Taylor recorded 347 receptions for 5,589 yards (an average of 16.1 yards per catch) and 43 touchdowns. He also gained 1,517 yards and two touchdowns returning punts, and added another 276 yards returning kickoffs.

After hanging up his cleats following the 1995 season, Taylor surprised many by returning to his first passion. In 1998, he created J.T. Taylor Trucking Inc., a company that transports products from coast to coast. He initially employed five drivers, but in 2000, opted to downsize and get behind the wheel himself.

"I knew trucking before I knew football," Taylor said. "My grandfather and all of my uncles drove, so I grew up around it."

Taylor drives his W900L Kenworth from California to Philadelphia every week, delivering Sysco Foods and Perdue Farms Poultry. The 18-wheeler is equipped with two beds, two closets, a dresser, television, microwave and refrigerator.

The only drawback of the job for Taylor is the time it takes him away from his wife Elaine, and two daughters, who are both in college. Jonnelle attends her father's alma mater, Delaware State, while Natalie is closer to home at Utah State. But the couple has made it work, with Elana joining her husband for a few trips.

The most important thing is Taylor is content with his new life. Driving has more than filled whatever void football might have left behind. In fact, it has allowed him to leave the game behind altogether.

"Out of the people who know I played football, the majority of them know I don't really talk football," Taylor said. "I'll tell them 'Hey, I don't play football anymore man, you probably know as much as I do. But if you want to talk about trucking, I'll talk to you about that.'"