Frustrated by the team's decision to let him only participate in individual drills, Culpepper walked off the practice field -- accompanied by a member of Miami's security staff -- about an hour into Friday's start of a three-day minicamp and vowed that he'd block the Dolphins' plans to trade him.

Any team that's interested in my services, just sit tight. I'm not going to agree to a trade.

It was the latest entry in an up-and-down week for Culpepper. On
Monday, he was told his surgically rebuilt right knee was strong enough to let him practice. Tuesday, he learned the Dolphins were trading with Kansas City for Green. Wednesday, the team told Culpepper they wanted to trade him, prompting his Thursday request for a release.

"Any team that's interested in my services, just sit tight," Culpepper said. "I'm not going to agree to a trade."

Dolphins coach Cam Cameron said he couldn't give any details about the team's plans for Culpepper, but acknowledged that the fact Culpepper is his own agent does complicate matters.

"We've got to do what we think is in the best interest of the Miami Dolphins with the player in mind and his family in mind," Cameron said. "That's where we're at." 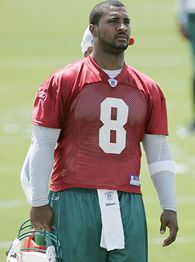 Culpepper was among five quarterbacks -- himself, Green, Cleo
Lemon, rookie John Beck and Gibran Hamdan -- when the first of Friday's two practices began. He started the day alongside them all, lofting easy passes to receivers and doing other simple drills. But when it came time for more team-specific work, Culpepper was little more than a spectator.

He claimed Dolphins quarterbacks coach Terry Shea told him he was being barred from team drills, so Culpepper left the field and headed into the weight room, where he remained for the rest of the morning workout.

"I thought I'd be able to at least do something," Culpepper said.

Green said he and Culpepper spoke briefly before practice, but only mainly about past knee injuries and rehab stints -- avoiding the Dolphins' current quarterback situation.

"I didn't think it was strange," Green said. "He was out there going through some reps and individual drills, but there was no awkwardness on my part."

The Dolphins want to trade Culpepper, telling him so just before
completing the Green trade and essentially giving last year's marquee quarterback acquisition notice that his time in South Florida was ending.

I'm not going to say I'm angry because I understand that's how
this business goes. But I believe I've got a lot of football left.

But Culpepper, who is his own agent, wants to choose his next
destination himself.

"He's still a great guy," Dolphins defensive lineman Vonnie Holliday said. "He's been a great teammate. But this is a business ... and I feel for him."

Culpepper suffered a serious right knee injury in 2005, was traded by the Minnesota Vikings to Miami for a second-round pick that offseason and surprised many by starting the Dolphins' first four games last season. He was hampered by knee problems, was sacked 21 times in those four games and ultimately was shut down for the remainder of the year.

He missed most of the Dolphins' offseason sessions because of
continued knee rehabilitation, and said Friday's practice was "a test" of where he is physically.

"I still have a ways to go," Culpepper said.

Meanwhile, Green was on the field with his new team for the first time. He wanted out of Kansas City because he felt the Chiefs wouldn't give him a fair chance to beat Brodie Croyle and Damon Huard for the starting QB job there this year, and worked out a contract with Miami several weeks ago.

It took more than two months for the Dolphins and Chiefs to agree on terms. Kansas City eventually settled for a fifth-round pick in exchange for Green, and could wind up with Miami's fourth-round selection in 2008 depending on how the 36-year-old quarterback fares this season.

Many Dolphins, even those who wanted to see Culpepper succeed in
Miami, welcomed Green with open arms.

"He's a leader," Holliday said of Green, his former teammate in Kansas City. "And that's what we need right now."

Culpepper is owed $5.5 million for the upcoming season and said the structure of his current deal -- which runs through 2013 and is worth $51.5 million -- will make it nearly impossible for another team to trade for him.

If Culpepper doesn't restructure that deal, it's a virtual certainty no other team would be willing to make a trade with Miami for him.

"I definitely expect to be released," Culpepper said. "I will not be traded."