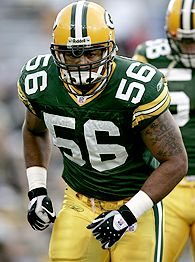 Police said in a statement that Barnett was taken into custody for battery after allegedly being involved in a physical altercation about 2 a.m. at the Wet. He was taken to Outagamie County Jail in Appleton and released within an hour after posting a $500 cash bond.

Barnett appeared for the Brett Favre Celebrity Softball Game later Sunday, participating in a preliminary game involving Packers players and sponsors. But he left the field before the regular game -- attended by a record crowd of 8,597 -- and didn't return.

In a statement issued after the game, the team said, "We are aware of the incident in Appleton involving Nick Barnett. The Packers organization is going to defer further comment until we have had a chance to speak with Nick and gather more facts."

Barnett is in his fifth year with the Packers, who selected him
in the first round of the 2003 draft. He's been the starting middle
linebacker since his rookie season.

The Packers gave Barnett with a six-year, $34.85 million
contract extension in April.

His arrest comes in the midst of the Packers' organized team
activities. The voluntary workouts, which started May 30, resume
Monday and end Tuesday.