HOUSTON -- Jim Norton, a four-time AFL All-Star safety and
an original member of the Houston Oilers, has died. He was 68. 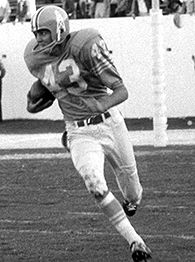 Norton died June 12 in Garland, a Dallas suburb, according to an
obituary released by the Gonzalez Funeral Home. A cause of death
was not given.

Born in Los Angeles, Norton was a three-sport athlete at
Fullerton Union High School. He played football for four seasons at
Idaho before he was drafted by the Detroit Lions in 1960. He never
played for the Lions, instead joining the Houston Oilers that same
year, when they won the first AFL championship.

Norton retired in 1969 after playing nine seasons with the
Oilers, and he remains the franchise leader with 45 interceptions.
He also punted for the Oilers, and his 519 career punts were a
franchise record until Craig Hentrich passed it in 2004.

"Jim was one of the great original Oilers and a major factor in
the early success of our franchise," owner Bud Adams said. "He
was well-respected as a player and as a person."

Norton's No. 43 is one of six jersey numbers retired by the
franchise, a group that includes Elvin Bethea, Earl Campbell, Mike
Munchak, Bruce Matthews and Warren Moon.

"It was a fitting tribute that his jersey No. 43 was the first
to be retired by the club," said Adams, who moved the franchise to
Nashville, Tenn., in 1997. "Our thoughts are with his family in
their time of grief."

Norton is survived by his wife, Ginny; a brother, John Norton; a
sister, Janet Cooke; three sons and two daughters.

A memorial service was scheduled for June 29 at St. Joseph
Catholic Church in Richardson, Texas.