Editor's note: The following excerpt from the book "Never Give Up", written by New England Patriots linebacker Tedy Bruschi (with Michael Holley), tells the frightening story of how Bruschi learned he had suffered a stroke.

The Stroke
After Tedy fell asleep while watching a replay of a the Patriots' conference championship win over the Steelers, he was dreaming of hitting Jerome Bettis when the stroke hit him.

There was Bettis in my dream, running toward me. And there I was getting ready to wrap him up and make the sure tackle. But this time there was no playful trash talking at the end of the play. This time my muscles contracted and there was tightness in my neck. My fists were clenched and my arms were in the air, as if I were bracing for something big. That's how I awoke at 4 AM. It was no longer a dream; there certainly was something odd about my left arm and left leg. When you play pro football, you get used to playing in pain and waking up sore.

You really do develop a threshold for pain and, when you're on the field, you tell yourself that the pain will go away soon. (You hope "soon" is the 20 seconds or so you get between contact and the next play.) So I stayed in bed for a few minutes, trying to make a fist and regain the strength in my arm. It never occurred to me that something was really wrong. 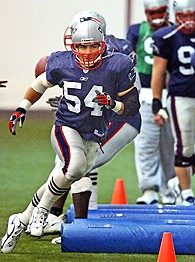 That night, as usual, I slept to Heidi's right, the side of the bed closest to two windows in our bedroom. As I got up to use the bathroom, I noticed that the numbness in my leg was more problematic than I thought. The "walk" to the bathroom never happened. I tried to stand and lost my balance. I grabbed a post at the foot of the bed, saving me from crashing into the windows. But the sudden grabbing of the bed and the commotion to keep myself standing was enough to awaken a confused Heidi.

"What are you doing?" she said.

Neither one of us was processing what the other one was saying. It was too early, and we were both disoriented. She told me to get back in bed, and I told her I would after I went to the bathroom. But my sleeping left leg and left arm wouldn't cooperate, so I got down on my hands and knees and crawled to the bathroom. Once there, I obviously couldn't stand. I sat on the toilet for a few seconds. I had to hold myself there until I was finished, and when I finished I sat there trying to figure out how I was going to get back to bed. It seems so clear telling the story now.

Now I know that I should have been more concerned earlier and refused to go back to bed. All the symptoms were there: no balance, numbness, and the early stages of a severe headache. But that night, I just sat on the toilet, wondering if all of it happened because I slept awkwardly. I must have been in there for 10 or 15 minutes, because Heidi woke up again.

"I think I slept on my arm or something, and now I've got a headache'' I replied, still sitting in the bathroom.

"Maybe you were sleepwalking,'' she said. "Come back to bed.''

I did go back to bed -- through the air. I wasn't confident that I could make the short walk from the bathroom, so I took a step out and leapt. I dived in, landed sideways, and slept that way for the next hour before waking up again. This time the headache was stronger than before, and I couldn't get comfortable in our bed.

Heidi got some Tylenol and after I took it, I decided to sleep downstairs on the couch. But I had to make it downstairs. I sat on the edge of the stairs, like a small child who hasn't quite mastered walking, and slid to the bottom. I made another dive, this time for the couch, and slept there. Briefly.

There have been many rough, sleepless nights in my NFL career. There are times when a shoulder is so tender that even rolling over brings a great deal of pain. But the early morning hours of February 15th were different because there were so many moving parts: the inexplicable headache, the lack of balance and coordination, and the numbness on the left side of my body. I took an Aleve and, surprisingly, had a much easier time walking up the stairs and getting into bed. I fell asleep and, 90 minutes later, Heidi let me rest when the boys awoke at 6:30.

Heidi may have closed the door so I could sleep uninterrupted, but the incidents at 4 and 5 AM stayed with her as she fed the boys. She often says that she knows me better than I know myself and she's right. She has watched me play football since my days at the University of Arizona, so she knows the difference between football discomfort and something else.

This was clearly something else, so Heidi was eager to talk to her father, Bill Bomberger, who is a physician's assistant in Tucson. We're always asking Bill for medical advice, and he's always willing to help.

Much later, Bill would scold us for waiting until 10AM on the East Coast -- 7 in Arizona -- before calling him. Heidi explained that she didn't want to wake him up too early. Besides, neither one of us ever imagined that February 15th would be one of our longest days of 2005, and a day that we'd never forget for the rest of our lives. Heidi called her father at 10 and told him there were some strange things going on with me in the middle of the night. She described my symptoms, and Bill came to a swift conclusion: I needed to be seen. Immediately.