TERRE HAUTE, Ind. -- Already best on the field, Tony Dungy
is now tops in the bookstore.

Six months after becoming the first black coach to win a Super
Bowl, he's about to grab the No. 1 spot on The New York Times'
bestseller list. 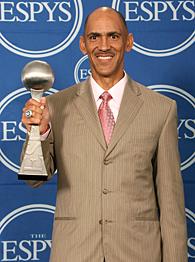 His memoir, "Quiet Strength: The Principles, Practices, and
Priorities of a Winning Life," on Sunday will claim the top spot
for nonfiction hardcover, his publishing company said in a
statement Wednesday. Tyndale House Publishers said it is the first
NFL-related book ever ranked No. 1.

After finishing morning practice Wednesday, the Indianapolis
Colts coach said he was aware of the book's ranking and surprised
by the sales.

"It's really hard for me to believe," Dungy said. "It's gone
way above and beyond what I expected, and I think part of it may be
that people are tired of reading about negative stuff. I guess it's
the right time."

Tyndale has ordered a fifth printing of "Quiet Strength," and
by the end of this week, more than 315,000 copies will be in print,
the publisher said.

The book takes readers from Dungy's childhood through some of
his life-changing moments as an adult. One chapter is devoted to
the death of his son, James, who committed suicide in December 2005
at age 18.

Fewer than 25 sports-related books have earned top billing on
the bestsellers list that began in 1942, Tyndale said. Among them
are Jose Canseco's "Juiced," Pete Rose's "My Prison Without
Bars," Lance Armstrong's "It's Not About the Bike," and Laura
Hillenbrand's "Seabiscuit."

But none of them had NFL connections, according to Tyndale
House, a Christian book publisher from Cold Stream, Ill. It is also
the first No. 1 book for Tyndale in hardcover nonfiction since 2002
when Lisa Beamer's "Let's Roll" made it, the company said.

Dungy said he's heard only one real concern from the publisher.

"They wanted to know where to put it," Dungy said. "They
weren't sure if it should go in the African-American section, the
religion section or the sports section."

For Dungy, the stoic coach of the Super Bowl champions, it's yet
another milestone in a year filled with them. In January, his Colts
won their first AFC championship since moving to Indianapolis in
1984. Two weeks later, Dungy became the first black coach to win
the Super Bowl.

There was the team trip to the White House, appearances on
television shows, and in July, Dungy won an ESPY for best coach or
manager.

Between the ESPYs and the start of training camp Sunday in Terre Haute, Dungy traveled the country on a promotional tour that
included stops at the "Late Show" with David Letterman and the
"Tonight Show" with Jay Leno.

Dungy said he intends to donate most of the proceeds of the book
to charities but wouldn't identify them.

But don't expect a sequel.

"Certainly not," Dungy said. "This was certainly a one time
thing, and it just seemed to be the right time. It's done well."