The NFL commissioner, making a tour of training camps, raved
about Detroit Lions coach Rod Marinelli and his players after
visiting them Thursday. He spoke to them mostly about their
responsibilities as players.

As soon as Goodell started taking questions during a news
conference, however, he was asked about Vick. And the questions
kept coming.

There has been an unrelenting drumbeat of news concerning Vick,
who is charged with running a dogfighting ring on his Virginia
property. Goodell insists this is not eclipsing enthusiasm about
the game itself.

"I don't think it's overshadowing the season," he said. "I
think our fans are excited about football, but I understand the
interest in the story."

Vick is facing increased pressure to strike a deal with
prosecutors in his federal dogfighting conspiracy case. He
conferred with his lawyers for hours Wednesday. 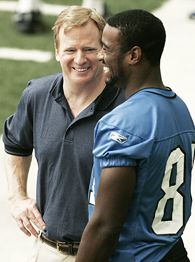 "We're going to do what we always said we were going to do,
which is rely on the facts," Goodell said. "If there is some type
of a plea agreement, then we will obviously take the time to
understand what that plea is and we'll see how it fits into our
personal conduct [policy]."

Goodell barred Vick from taking part in training camp while the
league investigates. The commissioner said the league is monitoring
talks between Vick's lawyers and prosecutors. He wants the legal
process to run its course before he rules on Vick's future in the
league.

Under NFL policy, a player can be banned for life for illegal
gambling or associating with gamblers, and Vick might face that
penalty.

"[The gambling] is certainly an issue," Goodell said after
meeting with the Cleveland Browns at their year-round training
facility. "Law enforcement may be concerned about certain things
about this. We may be concerned about other aspects of this. That's
why we want to evaluate what the government has. We don't know all
of the facts on that. Michael's team may not know all the facts at
this point in time."

The quarterback was linked to betting by a statement signed by
former co-defendant Tony Taylor, who pleaded guilty and agreed to
cooperate with the government, and the July 17 indictment.

Two other co-defendants -- Purnell Peace and Quanis Phillips --
are to enter plea agreements Friday. Prosecutors have said they
will seek a superseding indictment later this month that could mean
additional charges against Vick.

Vick has pleaded not guilty to conspiracy to travel in
interstate commerce in aid of unlawful activities and conspiring to
sponsor a dog in an animal fighting venture. If convicted, he faces
up to five years in prison and a fine of up to $250,000.

According to the statement signed by Taylor as part of his plea
agreement, Vick financed virtually all of the "Bad Newz Kennels"
dogfighting enterprise on Vick's property.

A search of his property in April turned up dozens of pit bulls,
some of them injured, as well as equipment commonly used in
dogfighting. The indictment said dogs that lost fights or fared
poorly in test fights were sometimes executed by hanging,
electrocution or other brutal means.

The grisly details have fueled public protests against Vick and
have cost him some lucrative endorsement deals.

Vick's charges have also hurt the NFL's image in an offseason
also marked by suspensions of Adam "Pacman" Jones, Tank Johnson
and Chris Henry for off-field conduct. Goodell contends just four
players out of about 2,000 in the league are generating most of the
scrutiny.

"I've said to Pacman and any player, 'You have to earn your way
back into the National Football League and you have to do it
through your conduct,"' Goodell said. "It's not about what you
tell the commissioner, or what you tell anyone. It's your conduct
and your activities. I was disappointed with some of the activities
that Pacman got involved this spring, after we had met and had a
lot of discussions.

"Michael knows exactly how I feel."

Goodell's visit was well received by the Browns. Several of the
players asked questions following the commissioner's 15-minute talk
that touched upon subjects ranging from concussions to conduct.

"It was a treat. It broke camp up for 15 or 20 minutes," wide
receiver Joe Jurevicius said. "Obviously, he's a man with a lot of
power and he'll be the face of the NFL for a while. He's going to
do a lot of great things and he came to say that he's not doing
this to hurt anybody. He's doing this to help us."

During the Browns' two-hour practice during a humid afternoon,
Goodell and former Cleveland quarterback Bernie Kosar mingled with
fans, who had their own questions and comments.

Goodell has sensed nothing but positive feedback and support
during his tour of the camps.

"I'm proud of our players. I'm proud of what they do in the
communities and on the field," he said. "I think more has to be
discussed on that. We have always talked about the game -- having
the focus stay on football. We're here now and it's football
time."