The legitimacy of the New England Patriots' accomplishments under Bill Belichick might be in question these days, but the coach's future in New England should not be. 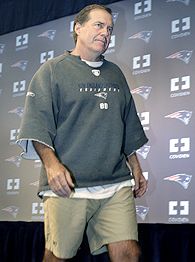 Belichick and Patriots ownership recently agreed to a long-term contract extension. The pact will keep Belichick on New England's sideline through at least the 2013 season, according to league sources and sources close to the coach. The deal was agreed to before the recent "spying" scandal in which the Patriots were punished by the NFL.

It's unclear how many years Belichick had remaining on his previous deal, as he and ownership like to keep details of the coach's contract private.

There were reports in the offseason that Belichick's deal was up after this season and others that it expired after next season, prompting speculation that the Patriots unusually aggressive approach to the early stages of free agency and the draft weekend trade that netted controversial receiver Randy Moss were signs that Belichick was gearing up for one more run at a title before leaving.

Critics of commissioner Roger Goodell's decision to take a draft choice(s) and fine the Patriots $750,000 ($500,000 to be paid by Belichick) rather than suspend Belichick for illegally videotaping opponents' defensive signals say the penalties hurt the franchise long-term more than they do the Patriots' head coach. But barring a change of heart on either side, Belichick will be with the franchise long term.

So, while Belichick's salary for 2007 had been reported to be in the $4.2 million range, it certainly is conceivable that he could have commanded anywhere between $6 million and $8 million annually with the extension.

The Patriots' last public statement regarding Belichick's status came in July 2003, with Belichick entering the second-to-last season of his original Patriots contract, when the team announced he had been extended through 2006. In January 2006 there were reports that he had been extended again, though it was unclear for how long.

In July, Belichick told New England-area reporters, "I don't talk about contracts, but I would say I like working here, I like the organization -- ownership, coaches, scouts, players, and the guys I work with. I appreciate the opportunity to work here and it's a good situation. I don't see that changing anytime soon."

In 12 seasons as a head coach with the Browns and Patriots, Belichick owns a regular-season mark of 111-81. Only Hall of Famers Tom Landry (20), Don Shula (19), Joe Gibbs (17), and Chuck Noll (16) have more playoff victories than Belichick's 13, all but one of which has come at the helm of the Patriots. The Patriots have won five AFC East titles over the past six seasons along with three Super Bowl championships.

Michael Smith covers the NFL for ESPN. Information from The Associated Press was used in this report.