IRVING, Texas -- Defensive lineman Tank Johnson, who cannot play until midseason because of an eight-game NFL suspension, signed a two-year contract Tuesday with the Dallas Cowboys on Tuesday. 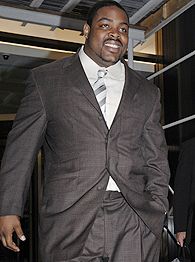 Johnson, who played the last three seasons for the Chicago Bears, can't play for the Cowboys and won't be paid until he completes his eight-game NFL suspension for violating probation on a gun charge. He has
served the first two games of that suspension and will still have
to apply for reinstatement.

Johnson signed after visiting with the Cowboys and taking a
physical. He will make about $255,000 this season, the prorated
portion of a minimum contract.

"For a lot of reasons, he really just felt the Cowboys were the
right fit," said Johnson's agent, Jerrold Colton. "He's so
thankful to them for giving him this opportunity. He is very
determined to prove they made a wise decision in believing in him."

The team issued a news release confirming the signing and
announcing that Johnson will discuss the signing in a conference
call Wednesday.

The Cowboys also said that Calvin Hill, a former player who is
now a consultant specializing in monitoring troubled players, will
be available for comment Wednesday, as will coach Wade Phillips,
owner Jerry Jones and Johnson's new teammates.

NFL spokesman Greg Aiello said the earliest Johnson would be
eligible to play is Nov. 11 at the New York Giants, the Cowboys'
ninth game of the season. Dallas has an open date in the NFL's
eighth week.

Johnson could provide late-season depth on a defensive line that
lost starting nose tackle Jason Ferguson for the year because of a
torn right biceps in the opener. But Johnson will have to adjust to
Cowboys' 3-4 scheme, which is different from what he's played in Chicago.

Although Johnson can't work out with Dallas until the week of
the Giants game after his suspension ends, the team had to make
room for him on the 53-man roster. The Cowboys released backup
cornerback Nate Jones on Tuesday.

The Cowboys will place Johnson on the reserve/suspended list
Wednesday, the earliest that move can be made. That will create a
roster opening.

Jay Ratliff, a third-year player, replaced Ferguson as the
starting nose tackle. Ratliff has five tackles, a sack and a fumble
recovery for the Cowboys (2-0). Coincidentally, Dallas plays at
Chicago on Sunday night.

In 46 games (15 starts) with the Bears, Johnson had 63 tackles,
nine sacks and a forced fumble. He was a second-round pick out of
Washington in 2004.

The Bears released Johnson on June 25, three days after he was
pulled over by police in Gilbert, Ariz. He already had served a
two-month jail term for the gun charge and been suspended by the
NFL for violating the league's personal conduct policy.

Gilbert police closed the June case without charging Johnson,
who was stopped for speeding. His blood alcohol level was .072,
under the presumptive limit for DUI.

NFL commissioner Roger Goodell had said the suspension could be
reduced to six games if Johnson had no further involvement with law
enforcement and underwent counseling. That was before Johnson was
stopped in Arizona.

That charge stemmed from Johnson's 2005 arrest after a Chicago
nightclub valet reported seeing Johnson with a handgun in his SUV.
He subsequently pleaded guilty to a misdemeanor charge.

Two days after last December's raid, Willie B. Posey, Johnson's
bodyguard, was shot and killed in an early morning fight while he
and Johnson were at a Chicago nightclub.

Johnson was suspended by the Bears for one game for being at the
club. He played in the Super Bowl when the Bears lost to
Indianapolis.

During Jones' ownership, the Cowboys have taken on plenty of
players whose character flaws have cost them jobs elsewhere. They
were successful with Alonzo Spellman, another former Bears player,
in 1999-2000 but less so with Dimitrius Underwood in 2000-01.

Jones signed few players with off-field issues the past four
seasons, when Bill Parcells was coach. With Dallas off to a strong
start after making the playoffs last season, Jones apparently sees
this as a low-risk, high-reward gamble.