NEW YORK -- Within minutes of his introduction as the newest member of Fox's NFL pregame show, Michael Strahan was spouting his opinion on Plaxico Burress' contract dispute, debating the issue with Jimmy Johnson, and trading barbs with Terry Bradshaw about their respective divorces.

Fox executives David Hill and Ed Goren leaned back in their chairs and grinned during Tuesday's news conference. That's the sort of personality and chemistry they hope the recently retired
New York Giants defensive end will bring to the show. 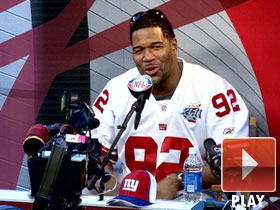 Known for his charisma and candor as a player, Strahan insisted he won't be afraid to criticize former teammates or friends within the league.

"I look at it as I'm on this team now," he said. "I have to speak objectively and tell the truth of what I see, regardless of if I was in the locker room last season or not, if those guys are my friends or not."

Another former Giant who moved to TV, Tiki Barber, riled his ex-teammates last year with critical comments he made while working for his new employer, NBC.

"I think my situation, my personality, I'm different than Tiki," Strahan said. "If I were to say something, I'm just going to tell the truth. For me, I think a lot of people expected that.

"I think for Tiki, it was a little bit out of his comfort level, what people expected of him."

Strahan joins a profession whose members he didn't always have the rosiest relationship with as a player. He would stop talking to reporters or bristle at sports talk radio comments.

Strahan said he had no problem with criticism unless it was personal or malicious. And if a player turned down his interview request?

"If somebody does that, then fine, that's their prerogative," Strahan said. "I've been there. I understand that."

Hill and Goren said that until Strahan retired, no player had come along who made them want to expand their core group of analysts in Bradshaw, Johnson and Howie Long. Strahan said he had offers from other networks but felt most comfortable at Fox, with which he had worked before.

The 36-year-old Strahan made seven Pro Bowls in his 15 NFL seasons and had the fifth most sacks in league history. His final game ended in a Super Bowl victory in February.

By hiring Strahan, Fox adds a younger commentator whose career fans are sure to remember.

"Definitely that youthful factor, just coming off the field, may attract certain people to watch the show, to tune in," Strahan said. "I think that was definitely one of the things they were going after."