NEW YORK -- Don Imus said Tuesday morning on his radio show
that he was trying to "make a sarcastic point" with his latest
on-air remarks about race, but that they had been misunderstood.

Imus resurrected his radio career six months ago with a pledge
to mend the wounds caused by a racist and sexist comment he made
about a women's basketball team.

On Tuesday he said he was following the spirit of that promise
by calling attention to the unfair treatment of blacks -- in this
case the arrests of suspended Dallas Cowboys cornerback Adam "Pacman" Jones.

"What people should be outraged about is that they arrest
blacks for no reason," Imus said Tuesday. "I mean, there's no
reason to arrest this kid six times. Maybe he did something once,
but everyone does something once."

Jones told The Dallas Morning News in Tuesday's editions that he's
upset by Imus' comments and plans to pray for the radio host.

"I'm truly upset about the comments," Jones said. "Obviously
Mr. Imus has problems with African-Americans. I'm upset, and I hope
the station he works for handles it accordingly. I will pray for
him."

Imus called the flurry of criticism surrounding the comments
"ridiculous" and said that his program's cast is now more diverse
than ever -- and includes a black producer and two black co-hosts, a
man and a woman.

"How insane would I have to be? What would I be thinking?"
Imus wondered aloud.

The latest comments by Imus to come under scrutiny were aired on
Monday's broadcast. During a conversation about Jones' run-ins with
the law, Imus asked, "What color is he?" Sports announcer Warner
Wolf said Jones -- formerly known as "Pacman" -- is
"African-American." Imus responded: "There you go. Now we
know." 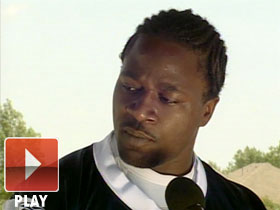 The on-air exchange came months after Imus' return to work on a
new show on WABC-AM following his firing from MSNBC and CBS Radio
for calling the Rutgers University women's basketball team
"nappy-headed hos."

When he returned to work, Imus gave a lengthy on-air apology and
pledged to use his new show to foster an open dialogue on race
relations.

In a statement issued Tuesday, Rutgers coach C. Vivian Stringer said, "There is no need to revisit the past." She said the program would not have any additional comment.

Co-host Karith Foster, who is black, came to Imus' defense during Tuesday's broadcast, saying, "People who interpret what you said as racist clearly didn't hear the whole thing, and they don't know who you are and what the program is about -- and they obviously haven't been listening."

WABC and Citadel Broadcasting Corp. vice president Phil Boyce
said Monday that it was unlikely the broadcasters would take
disciplinary action against Imus.