Sitting in a San Diego bar a year ago and pondering the idea of streaking Super Bowl XXXVIII in Houston, Mark Roberts' emotions drifted to a place they don't often visit. 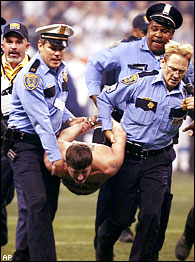 "They'll kill me down there," said Roberts, a native of Liverpool, England. "That's Texas -- they'll execute me."

Yet there was Roberts Sunday night, using a Velcro officiating outfit to sneak his way onto the field at Reliant Stadium, then stripping the clothes off and parading around in a silver G-string.

So much for hesitance.

"I got it in my head that I had to streak the Super Bowl," Roberts told ESPN.com after being released from a Houston jail on Monday. "I made it my mission."

Roberts performed an Irish Jig in front of Carolina kicker John Kasay and was trying to elude security officials when New England Patriots linebacker Matt Chatham flattened him with an elbow. Roberts was carried off the field hogtied by security.

Roberts faces charges of criminal trespassing and public intoxication. Though it's possible he could spend the next two years in jail, in a foreign country no less, Roberts couldn't hide his excitement Monday.

CBS didn't air Roberts' antics on its worldwide television broadcast, instead focusing its cameras elsewhere. But the man who considers himself to be the world's most prolific streaker -- he's bared himself to crowds at championship soccer matches to morning talk shows -- considers Sunday's feat his greatest. By his account, he had streaked 285 events since 1993.

"The holy grail of streaking," he said. "It doesn't get any bigger than this."

Roberts said he spent much of his night in jail telling stories and signing autographs.

"I signed for every cop in the station," Roberts said. "Those guys were great. I didn't have one bad policeman in there."

Roberts said he had planned his Super Bowl streak for weeks. He purchased an authentic game official's outfit, complete with hat, socks, shoes, whistle and penalty flags, on the Internet. He then cut the uniform in pieces and had a seamstress put it back together with Velcro.

He purchased a front-row ticket to Sunday's game and hid his Velcro referee's outfit under his regular clothes.

"I was a little bit worried the authorities would be looking for me," Roberts said. "When I was getting frisked and patted down, the guy saw my clothes underneath and asked about a piece of Velcro hanging out. I told him it was me warm underclothes and he let me go."

Just before the second half was about to begin, when security looked away, Roberts ripped off his street clothes, scaled a wall and headed to the field.

"I was down there for like five minutes, walking around, saying hello to people," he said. "They didn't know who I was."

He said he casually walked to midfield, greeted a few players with a hello and then ripped off his suit, revealing nothing more than a tiny G-string. Painted on his back, he said, were the words "Super Bowel."

Roberts performed an Irish jig, then danced a moonwalk before security officials came after him from every corner of the stadium.

"The goal was to take the football and score a touchdown," Roberts said. "But when I got out there, I realized there was no way I was going to get past those football players."

An online gambling Web site sponsored the streak. For past pranks, the company has helped to pay Roberts' fines, though a company official would not confirm that it would pay any fines in Houston.

As for what sort of marketing boost the Web site would get from the stunt, the official wasn't sure.

"We would have gotten a bigger bang for our buck if Janet Jackson wouldn't have pushed out her [breasts]," the company official said. "She stole the friggin' show."

Roberts had planned to streak during last year's Super Bowl in San Diego, but after flying from England he said his chances of obtaining game tickets fell through.

Released on a $500 bond, Roberts is scheduled to appear Feb. 9 in a Houston court, where he faces a charge of trespassing of property without forcible entry. He faces up to a year in jail and a $4,000 fine.

But in Roberts' eyes, it was worth it.

"When I ran out there, the noise was deafening," Roberts said. "I blew the roof off that stadium -- it's not retractable anymore."