PHILADELPHIA -- Terrell Owens says his recovery is way ahead
of schedule, surprising even his doctor.

Whether the All-Pro wide receiver will be healthy enough to play
for the Philadelphia Eagles in the Super Bowl remains a mystery. 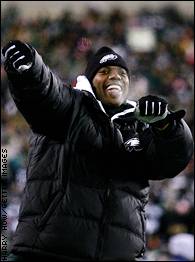 "What a lot of people don't realize is that I've been doing a
lot of rehab on my own, a lot of healing on my own, but spiritually
God is healing me and I'm way ahead of where a lot of people expect
me to be, even the doctor," Owens said Monday. "He's even shocked
at what he's seen. Spiritually I've been healed and I believe that
I'll be out there on that field Sunday, regardless of what anyone
says."

He'll have a better idea about the physical healing Tuesday, according to the Phildelphia Inquirer, after his visit to Mark Myerson, the Baltimore-based foot specialist who operated on his ankle.

Owens was among several Eagles, including quarterback Donovan McNabb and running back Brian Westbrook, who sat courtside for
Monday night's NBA game between the Philadelphia 76ers and Miami
Heat. Owens, sidelined with an ankle injury since Dec. 19, was all
smiles while talking about a possible return for the Feb. 6 Super
Bowl against the New England Patriots.

Eagles coach Andy Reid said earlier in the day that Owens has made great progress, and will try to run this week.

"I've been doing all my rehab in the pool," Owens said.

He was back on the sideline Sunday for the NFC title game, only this time he served as head cheerleader, flapping his arms, waving
a towel and encouraging the crowd to make more noise. The Eagles
advanced to the Super Bowl with a 27-10 victory over the Atlanta
Falcons.

Owens jogged onto the field and pumped up the crowd during
pregame introductions, and jumped around on the bench during the
game.

But making cuts and taking hits are another story.

Owens, who led the Eagles with 77 catches for 1,200 yards and 14
TDs, tore two ankle ligaments and broke his right leg in a game
against Dallas. Myerson inserted two screws in Owens' ankle and a
plate on the outside of the ankle three days after he was injured.

Owens was told after surgery that he had only an outside chance
of returning for the Super Bowl, which was seven weeks away at the
time. But he has rehabbed vigorously and has told teammates he's
going to play.

Staying optimistic is one thing. Will he really be healthy
enough to take the field in Jacksonville, Fla.?

"That's the question of the day. It remains to be answered,"
Owens said. "In due time. I've got two weeks to prepare and get
myself healthy enough to get out there on that field. When the time
comes, we'll make that decision and we'll see."