PHILADELPHIA -- Chuck Bednarik holds a grudge only slightly
larger than his legacy as the last of the 60-minute men.

Known for his hard-nosed play and big hits, Bednarik is just as
well-known for his biting, blunt diatribes about today's NFL,
Philadelphia Eagles owner Jeffrey Lurie and any other topic that
reminds him the game isn't the same as when he played. 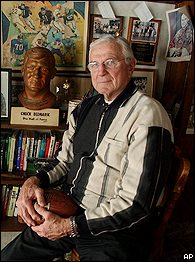 He also is protective of his Hall of Fame legacy. While he
boasts about playing both center and linebacker for part of his
14-year career, Bednarik is equally as proud to have played on the
last Eagles team to win a championship (1960).

That's why Bednarik will be rooting against the Eagles in the
Super Bowl against New England. He has no desire to ever see the
franchise win another title.

Bednarik admits he's jealous and resentful about the salaries
and spotlight today's players receive, calling them "overpaid and
underplayed." Bednarik says he never made more than $27,000 and
supplemented his income with an afternoon job selling concrete,
earning him the nickname "Concrete Charlie."

Imagine the multimillion dollar endorsement deals and magazine
covers for a 60-minute player today. Forget working for a concrete
company. He could probably own one. Or five.

"How would you feel sitting there knowing what transpired when
I played?" said Bednarik, who lives in Coopersburg, Pa., and turns
80 in May.

Maybe Bednarik would keep his sentiments to himself if not for a
dispute with the only team he ever played for.

Bednarik wanted Lurie to give the books to the team. He says
Lurie refused because the Eagles aren't allowed to give the team
gifts.

Bednarik has since distanced himself from the Eagles, only
reluctantly showing up for a reunion because the organization
surprised him by agreeing to his demand for a limousine. Bednarik
still watches football and likes Eagles coach Andy Reid because his
stoic demeanor reminds him of Buck Shaw, the coach of the 1960
team.

"Andy's just a nice person," Bednarik said. "When he first
came here, he wanted to meet me."

Appropriately, a man who worked in concrete forever cemented his
stature as one of the legendary Eagles with two of the most
celebrated hits in team history in 1960.

He knocked out New York's Frank Gifford with a blow so ferocious -- and legal -- that the Giants running back suffered a concussion
and didn't play again until 1962. Then there was Bednarik's
game-saving tackle of Green Bay's Jim Taylor on the final play of
the '60 title game.

Bednarik refused to let Taylor up as the final seconds ticked
off, allowing the Eagles to hang on for a 17-13 championship win on
Dec. 26, 1960, in Franklin Field.

"Everybody reminds me of it and I'm happy they remind me of
it," Bednarik said. "I'm proud and delighted to have played in
that game."

Bednarik recalled playing on all but two kickoffs against the
Packers. He said he could have kept playing if he needed to, unlike
today's players who "suck air after five plays."

In 1996, Deion Sanders played regularly on both offense and
defense for the Cowboys, becoming the NFL's first two-way starter
since Bednarik in 1962. Bednarik was not impressed.

"The positions I played, every play, I was making contact, not
like that ... Deion Sanders," Bednarik said. "He couldn't tackle
my wife. He's back there dancing out there instead of hitting."

No topic is off limits for Bednarik, not even the crazed Eagles
fans who paint their faces, sing the fight song and camp out early
for the perfect tailgate spot on home games.

Some would say the same thing about Bednarik.

Tommy McDonald, a Hall of Fame receiver who played with Bednarik
from 1957-62, remains an avid Eagles supporter (he offered to suit
up if Terrell Owens can't go) and has grown tired of Bednarik's
act.

While McDonald says he recently rejected an offer to sell his
championship ring for $5,000, Bednarik pawned the same ring and his
Hall of Fame ring for needed cash.

"I'm not struggling, but I'm not that well off," Bednarik
said. "I have my wedding ring. I don't need to wear nothing else.
It paid for some of my income tax. I never had a child go to school
here and my school tax is $5,116. School tax!"

Bednarik receives a football pension check, but, not
surprisingly, he said it isn't enough.

The winning players in Sunday's Super Bowl will get a bonus that
is more than Bednarik ever made in a season. He just hopes the
Eagles won't be the ones cashing those checks.

"They can root for 'em, but I want us to be the last
champions," he said.