PONTIAC, Mich. -- Of the many translations of his French-derived surname, the one that might most aptly fit Dick LeBeau is "the beauty."

Because to Pittsburgh Steelers defenders, their ingenious and father-like coordinator is, to employ a bit of old Western Pennsylvania slang here, a real beaut.

"Probably the best man, and not just one of the best coaches, I've ever met in my life," insisted defensive end Kimo von Oelhoffen, who has played five seasons under the tutelage of LeBeau in Cincinnati and Pittsburgh. "The things I've learned from him about football and about life, I'll cherish forever, really. Every minute you're around him, believe me, is a minute where you've benefited in some way." 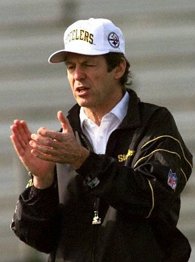 Von Oelhoffen was one of the ringleaders, along with smack-talkin' linebacker Joey Porter, of the New Year's Day tribute Steelers players undertook in honor of LeBeau, when all 27 defenders spent $300 each to buy Detroit throwback jerseys bearing LeBeau's old No. 44 from his days as one of the NFL's top cornerbacks, and then wore them to that day's season finale against the Lions. And von Oelhoffen's sentiments are echoed by players young and old on this squad.

LeBeau, who recites to his players "The Night Before Christmas," during every holiday season (and whose dramatic rendition of the Clement Moore classic requires no notes), is 68 years old. But LeBeau, whose trim figure makes him appear far younger than what his birth certificate says, has connected with virtually every player in the Steelers' defensive meeting room because of his rare ability to cross age lines.

And also because LeBeau, arguably among the premier defensive schemers of the league's modern era, makes playing defense fun for his charges.

A lot of players in the NFL pay lip service to loyalty. But the affinity between LeBeau and his players, who speak of him in near-reverential tones, is palpable here this week. Most of the defenders who have worked with LeBeau for even a short time regard him as a genius, and the label is probably justifiable.

"One play, I might be dropping [in coverage]," cornerback Deshea Townsend said. "The next, I might be sneaking up to the line to blitz off the corner. The next play, hey, who knows? But Dick knows. Because that man, let me tell you, knows all. How could you not love playing for a guy like that?"

A football lifer, LeBeau played 15 seasons for the Lions, and the three-time Pro Bowl performer retired with 62 interceptions (third-most in the NFL when he left the game) and 171 consecutive starts, still a league record for the position. Somehow, his name has fallen between the cracks as a candidate for the Hall of Fame, but his contemporaries are quick to note that he should be enshrined in the Canton, Ohio, football museum.

Those who have played for LeBeau during his 33 seasons as an assistant and head coach insist he merits Hall of Fame consideration, as well, for the defensive doodles he has drawn up during his three-plus decades on the sideline.

Certainly the most famous collection of X's and O's divined by LeBeau is the zone blitz scheme he devised in the 1980s to help counter the preponderance of West Coast-style offenses in the league. The fact LeBeau is still using derivations of the zone blitz, and that Seattle Seahawks head coach Mike Holmgren employs arguably the purest form of the Bill Walsh-designed West Coast passing attack, is one of the most notable schematic matchups for Super Bowl XL, clearly one of the game's top subplots.

It was in the mid-1980s that LeBeau, then the Cincinnati Bengals' coordinator, first hatched the zone blitz on unsuspecting offenses. Football purists still vehemently contend there is nothing original anymore in the game, nothing new under the NFL sun, that every newfangled nuance is little more than a tweak of something that has already been witnessed.

But the first zone blitz call -- "Fulcher-2-stay" was the precise parlance -- revolutionized the game on the defensive side.

The original zone blitz, designed around 245-pound safety David Fulcher, a hybrid defender with linebacker size but deceptively good range, suddenly blurred the lines between safeties and linebackers. And it redefined the roles, especially on third down, for players who traditionally rushed the quarterback and those who historically were charged with pass coverage responsibilities.

Because the essence of Walsh's passing game was timing, a quick release that stressed delivering the ball to the receivers in stride, LeBeau sought to counter with a defense that got sudden pressure and from unthinkable angles. The defense also was meant to crowd the short slant and hook zones the West Coast offense favors. Walsh loved having big receivers run quick slants. LeBeau's antidote was to have even bigger players, sometimes 260-pound ends, knocking the receivers off stride. Disrupt the clockwork timing of the West Coast offense, LeBeau reasoned, and you trump its strongest suit.

In the zone blitz packages conjured up from LeBeau's fertile imagination, defensive ends will often drop into coverage in the short hook and swing zones. Linebackers will rush the passer from every angle imaginable. Players will loop and stunt around each other. Safeties and cornerbacks will sneak up into the slot to rush off the edge. And in Steelers strong safety Troy Polamalu -- an incredible physical melding of explosive quickness and innate football instincts, and a man who might be the league's best defender right now -- LeBeau has found his latter-day David Fulcher.

There is no doubt that Polamalu, his dark tresses dangling well below his helmet, has become both the mane man and the main man for the Pittsburgh defense. He is the gridiron equivalent of a Vegematic, slicing and dicing his way to the ball, and wreaking all manner of havoc. While it might seem as if LeBeau has all but exhausted the devious devices created for Polamalu, the bag of tricks Steelers players promised this week is not quite empty yet.

"Hey, you're talking about the Thomas Edison of defensive coordinators," Porter said. "He'll invent something new."

Pittsburgh players swear that in their three previous postseason victories forged on the way to the Super Bowl berth, LeBeau has been at his best. Three different games, three widely varied opposing offenses with which to contend, three different game plans. So how exotic will LeBeau be on Sunday night? If he knows, he isn't telling, of course, but there are certain to be a few wrinkles in the ambitious game plan distributed to Steelers players last week.

"I guess, in some ways, it's kind of like music," said the deep-thinking LeBeau, whose wide range of interests includes playing the guitar. "I mean, there is probably a finite number of ways in which you can arrange [musical] notes, right? But here we are, thousands of years into human history, and we haven't reached the end yet. Every year, there are thousands of songs written, and thousands of new combinations of notes. So I guess there's some limit to what we can do on defense.

"But we haven't reached it yet."

It is LeBeau's seemingly limitless variations on a theme, the manner in which the veteran coach orchestrates his game plans, that most excites his defenders. Porter, who has been all but unblockable during the playoffs, dominating for long stretches from his weakside linebacker spot in the Pittsburgh 3-4 front, said one of the highlights of any week is when the game plan is handed out to the players.

"Every guy in the room," Porter said, "wants to see what coach LeBeau has schemed up for him."

Truth be told, though, the basics of LeBeau's zone blitz haven't changed all that appreciably since the David Fulcher days. Polamalu, clearly the instigator, is such a great athlete, and can do so many more things than Fulcher was capable of, that the possibilities have expanded. But the cerebral LeBeau has always been able to add to and subtract from his blitzing schemes, while still maintaining the foundation.

In his first tour of duty with the Steelers (1992-96), LeBeau's chess pieces were standout defenders such as safety Carnell Lake, cornerback Rod Woodson and linebackers Greg Lloyd and Kevin Greene, among others. The names have changed in this go-round for LeBeau, who rejoined coach Bill Cowher's staff in 2004, but the schemes haven't varied as much as some might suspect.

There is a perception in some quarters that LeBeau employs more straight blitzes now than in the halcyon days of the zone blitz phenomenon. But New England Patriots coach Bill Belichick told ESPN.com this week that LeBeau's zone blitz principles are still the underpinning on which the Pittsburgh defense is constructed.

Belichick pointed out that LeBeau's weekly changes to the scheme are "more subtle than most people think of when they talk about [altering] game plans. But if I took out a tape from 10 years ago and compared it to what [LeBeau] is doing now, you'd see the same principles, believe me."

LeBeau, whose legend has mushroomed during the Steelers' playoff run to guru-level proportions, agrees. He said that if he brought back players such as Lloyd and Lake, and gave them just a 24-hour tutorial, they would comprehend the Pittsburgh game plan for Super Bowl XL.

"It's a little like a recipe," LeBeau said. "You might try something a little bit different every time you use it. But the main ingredients stay the same."

The ingredient veteran Pittsburgh defenders want to add to the recipe Sunday evening is a Super Bowl ring for their beloved coordinator. This is a throwback sort of week for the Steelers, with the return of tailback Jerome Bettis to his hometown for what figures to be his final appearance, and the support for the Rooney family, in the sense that it would be gratifying to present another Vince Lombardi Trophy to a clan whose stable leadership has meant so much to Pittsburgh and to the league.

But the Steelers' defenders are keenly aware that LeBeau also has returned to a city in which he once starred. Part of what drives Steelers defenders is the knowledge they can add an important entry to LeBeau's lengthy résumé, and in a city where his professional career sank its roots.

Part of the LeBeau lore is that he knows virtually every line of dialogue from the classic movie "The Wizard of Oz." Reminded of that, linebacker James Farrior replied: "Yeah, but when you pull back the curtain on our wizard, it's the real deal standing there."

Just before the New Year's Day game, LeBeau phoned his mother to tell her about how his players had honored him by wearing the Lions' classic uniform jerseys. His mother asked LeBeau if he had been able to take a picture of the players.

"No, mom," LeBeau replied. "But the picture I've got in my mind of that moment is more than enough."

Sometime late Sunday, the Steelers' players hope to gather around LeBeau for a group picture of them and their leader, holding the Super Bowl trophy.

"For everything he's given us," von Oelhoffen said, "it would mean a lot to all of us to give him that moment."