DETROIT -- The play calls and their nomenclature, three moments that either accounted for or set up the Pittsburgh Steelers' touchdowns and which comprised 45.7 percent of their offensive output Sunday evening, will likely become a part of franchise lore.

Years from now, Steelers fans will fondly recall "Fake-39 Toss X-Reverse Pass," the 43-yard fourth-quarter touchdown pass from Antwaan Randle El to Hines Ward that secured Pittsburgh's 21-10 victory over the Seattle Seahawks in Super Bowl XL. And no one will soon forget "Counter-34 Pike," the second snap of the second half, when tailback Willie Parker scored on a Super Bowl-record 75 yard gallop, a touchdown that not only settled a shaky Steelers offense, but provided Pittsburgh a workable 14-3 lead.

"And don't forget the other big play," reminded Steelers offensive coordinator Ken Whisenhunt, the mastermind of play calling and precise timing, and a man who certainly has earned the right to be considered one of the NFL's hottest assistant coaches. "The one where Ben [Roethlisberger] rolled around and then converted the third-and-28 play [with a 37-yard completion to Ward]."

Uh, the name for that one, Ken?

"I think Hail Mary," Whisenhunt replied, laughing. "What else can you call it?"

Indeed, on a night when the Steelers finally won their long awaited "one for the thumb," despite playing with a quarterback who often appeared all thumbs, there was a wing and a prayer and a pair of fast feet. Those disparate components added up to a win that allowed the Steelers to join the Dallas Cowboys and San Francisco 49ers as the only franchises in the league with five Super Bowl triumphs.

The wait has been a long one for loyal 'Burghers who turned out in full force at Ford Field, with black-and-gold clad, Terrible Towel-twirling rowdies comprising as much as 80 percent of the crowd. And it took the three long plays, on an evening when Roethlisberger was just shy of awful and the Pittsburgh offense lacked rhythm, to end a wait that began after the Steelers defeated the Los Angeles Rams in Super Bowl XIV.

The game also ended, it seems, the 13-year career of Steelers tailback Jerome Bettis, who all but conceded he has played his final game. In a finale that Bettis termed "a dream," the game was often a nightmare for Roethlisberger, the second-year veteran and second-youngest starting quarterback in Super Bowl history, who completed just 9 of 21 passes for 123 yards, with no touchdown passes, two horrid interceptions and a 22.6 passer rating.

The rating is the lowest ever for a Super Bowl-winning quarterback, and nearly 30 points lower than the previous record held by John Elway, who posted a rating of 51.9 in Denver's victory over Green Bay in Super Bowl XXXII. Roethlisberger's biggest gaffe of the night came when he tossed an interception from the Seattle 7-yard line with Pittsburgh set to break the game open. Roethlisberger didn't see cornerback Kelly Herndon lurking in the right flat, lobbed the ball for wideout Cedrick Wilson, and underthrew him.

But the Steelers, who finished with only 14 first downs and 339 yards, and who suffered eight series of four snaps or fewer on their first 10 possessions (not counting a one-play drive at the end of the first half that ended with a Roethlisberger kneel-down), got huge and timely plays when they were most needed.

"They [dubbed] this 'Super Bowl Extra Long,' right, because of the whole X-L deal?" said Steelers offensive right tackle Max Starks, who had one of several key blocks on the long touchdown run by Parker. "Well, we just got right into the whole theme of things, with all the extra-long plays."

The 37-yard completion to Ward, who was named the game's most valuable player, set up Pittsburgh's first touchdown. It was arguably Roethlisberger's most notable and savvy play of the evening and came on the snap after he had absorbed an 8-yard sack by Grant Wistrom.

On the play, Roethlisberger was flushed from the pocket, rolled far to his left, and at one point actually glanced down to make sure he was still behind the line of scrimmage. He then heaved a deep pass across field that was underthrown, but on which Ward not only made a terrific circular adjustment, but also shielded strong safety Michael Boulware away from the ball.

"I actually caught the ball and his hand at the same time," Ward said of a catch that represented the Steelers' longest third-down conversion in the 20 games they played this season. "Luckily, I was strong enough to pull it away from him."

The Steelers were also fortunate Roethlisberger had gone to Whisenhunt seven weeks ago and asked if the offense could more regularly practice the kind of scramble or "dash" plays that are impromptu but also important. Whisenhunt acquiesced, the Steelers started working more on such situations, and it paid off on Sunday night.

Roethlisberger's 1-yard TD run three snaps later, a play reviewed by the replay official but on which the quarterback crossed the plane of the goal line while in the air, represented the only touchdown of the first half. It didn't take long into the third quarter, however, for the Steelers to strike again on Parker's lightning-quick burst. 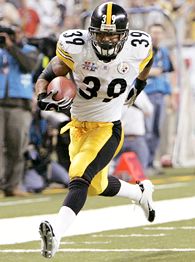 On the "Counter-34 Pike" play, Pittsburgh aligned in a three-wideout formation on second-and-10. Lined up as the lone back, Parker took the handoff, feinted to his left, then cut back hard to his right and through a gaping crease in Seattle's defense. Loose in the secondary, he dodged a desperation diving attempt by Seahawks safety Etric Pruitt, and raced down the right sideline for the score.

"What you saw there," Whisenhunt said, "was why 'Fast Willie' is called 'Fast Willie.' We called that play knowing it was a passing situation and they might be backed off a little. We felt like we could pop it for good yardage, but with Willie, you get that home run dimension, because of his speed, and he hit a home run on that one."

Said Parker, who finished with 93 yards on 10 carries: "You talk about running a play exactly the way it's drawn up? That was a textbook one there. The line just absolutely blew up the defense there. Once I made the cut inside [tight end] Heath Miller, all I saw was a lot of open turf out there. I kept thinking, 'Just don't fall down.' That was big."

Probably the biggest play of the night, though, was Randle El's touchdown pass to Ward on a double-reverse play. The score essentially put the game out of reach and, typically, was set up perfectly by Whisenhunt on a previous call. Two plays before the gimmickry, the Steelers had run a quick screen to Randle El for a 7-yard gain. So on the long pass play, Pittsburgh aligned in the same formation, brought the tight end in motion, and tried to bait the Seahawks into thinking the screen was coming again.

Instead, Parker took a pitch, then handed it off to Randle El, who found Ward behind the Seahawks' defense for the score. Key to the play, Whisenhunt and Steelers players said, was the realization that the Seahawks were playing minus two starters in the secondary, and that the backup Pruitt was likely to bite on the reverse, and come up into the no-man's land in which no defensive back wants to be caught.

Last week, in offering his views on the game to ESPN.com, New England head coach Bill Belichick was adamant that Randle El would make a big play in Super Bowl XL. A play, he said, for which "an opponent can't plan." The "Fake-39 Toss X-Reverse Pass" was that play.

Randle El has three options on the play: throw deep to Ward, throw to Parker, who after pitching the ball proceeds up the left sideline, or keep the ball and run. Ward was so far behind Pruitt and cornerback Marcus Trufant, though, there was really no option at all.

"I was so open," recalled Ward, who finished with five catches for 123 yards, "that I just kept thinking, 'Please, ball get here, huh!' It just seemed like it happened in such slow motion, you know? But it was a great play call, at just the right time, something that we had run before and had some success with, and it worked again.

"It was kind of typical of the night. We sputtered some, and gave the ball away a few times, but we made big plays. And big plays in big games is what it's all about."