DENVER -- Tom Brady slumped forward. Troy Brown leaned back. As the final seconds ticked away, quarterback and receiver, sitting next to each other on the New England Patriots bench, both closed their eyes.

All around them, 75,000 screaming, yelling, stomping Broncos fans whipped themselves into a frenzy, catching their breath between roars to kindly inform the modern-day Montana that he no longer was Mr. Postseason Perfection. 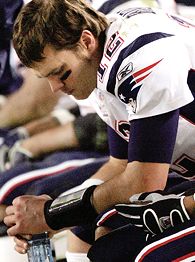 "Enjoy the offseason, Tom," another yelled.

Brady and Brown ignored them all. And as the Denver offense lined up in the victory formation, taking a knee and sealing their 27-13 divisional playoff victory, 12-year NFL veteran Doug Flutie came by, tapped Brady on the knee and told him to keep his head up.

This time, the only thing they were toting was a truckload of disappointment.

"It's going to be a long flight home, a long offseason," Brady said. "It's just tough all around."

For the last four years, NFL teams have tried and failed to find the key to beating the Patriots in the postseason. The Rams, Panthers and Eagles all came close in the Super Bowl, but all walked off losers. Yet in the end, the formula proved to be a pretty simple one. Just force the Patriots to turn the ball over. A lot.

New England had coughed it up only six times during its 10-game postseason winning streak and was plus-21 in turnover margin during that span. Saturday, the Broncos coaxed the Patriots into five turnovers that they converted into 24 points on just 24 yards.

"You roll the dice every time you turn the ball over in this league," Brown said. "And at a place like this, against a team like this, you're not going to win."

The final tally was as ugly as the score: A Kevin Faulk fumble in the running game, two Brady interceptions -- one in the Denver end zone -- in the passing game and two fumbles on special teams. Of even greater insult? Denver kicker Todd Sauerbrun forced one of the fumbles.

At one point, the team that had lost 10 fumbles in its previous seven games this year lost two in 18 seconds.

"You aren't going to beat anybody turning the ball over like that," Brady said.

In last week's playoff win over the Jaguars, New England fumbled four times but recovered them all. This week, they weren't so lucky.

"Denver caused a lot of those mistakes," defensive end Richard Seymour said. "I don't care what anybody says -- you have to give them credit."

Through the course of its impressive postseason run, the Patriots overcame the Kurt Warner-led "Greatest Show on Turf" St. Louis Rams. They overcome the chippy, never-say-die Carolina Panthers. And they managed to withstand a courageous effort by Terrell Owens and the Philadelphia Eagles. They always could overcome players. Talent. Schemes.

But they never had to overcome mistakes. When they had to, they couldn't. After this game, no one questioned Bill Belichick's genius. Or what effect the departures of coordinators Romeo Crennel or Charlie Weis might have had. Saturday's cause was helpless no matter who the coaches were.

"They made the plays they had to to win," tight end Christian Fauria said. "That's what we're usually saying. But the shoe is on the other foot tonight."

In addition to the turnovers, even more of the unthinkable happened. Adam Vinatieri missed a field goal. And though he threw for more than 340 yards, the usually pinpoint Brady was off on several throws, leaving the ball behind his receivers, or at their feet, or in the hands of the opposition.

Things were so out of whack that the ultra-tight Patriots, the no-I-in-team, one-for-all-all-for-one group started coming apart. Linebacker Willie McGinest shoved a teammate during a sideline argument. Cameras caught fellow linebacker Mike Vrabel trying to calm him down. McGinest declined to talk about the incident after the game.

"I'll talk about what happened on the field," he said. "That had nothing to do with why we lost this football game."

No, that was the turnovers. Though the New England defense did everything it could -- including holding the league's second-ranked rushing attack to just 39 yards through three quarters -- the offensive and special teams miscues were too much to overcome.

It all led to Brady's first postseason loss and the end of talk about a three-peat. Before this season, seven teams had won back-to-back Super Bowls, and none of them managed to reach the game a third time.

Now that number is eight.

The Postseason Patriots are dead, at least for this season. And Brady isn't quite sure what to do with the playoffs marching on without him.

"It's going to be hard to watch those games," he said. "Can both teams lose?"