INDIANAPOLIS -- Colts cornerback Nick Harper's wife told
police she accidentally stabbed her husband while waving a filet
knife at him during an argument, according to court documents. 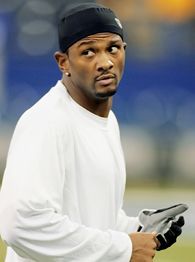 Daniell Harper, 31, remained Sunday night in the Hamilton County
Jail, where she was being held without bond on preliminary charges
of battery with a deadly weapon and criminal recklessness, both felonies.

"The accused advised that she was upset with the victim because he would not speak to her, so she obtained a filet knife from a kitchen drawer," Sheriff's Sgt. Kevin W. Fessel said in a sworn statement obtained by the Indianapolis Star.

Sheriff Doug Carter said he was waiting for a judge to decide her potential threat to Harper and the conditions for the woman's release. The county prosecutor also
must review the case.

On Saturday, Harper phoned 911 about 3:45 p.m. and was
treated at an Indianapolis hospital after deputies and paramedics
found him with a puncture wound to his right knee, police said.

Harper, 31, was listed as questionable but when the Colts defense took the field for the first time in Sunday's 21-18 playoff loss to Pittsburgh, he was in the lineup.

According to the Star's report, Fessel and Carter said Nick Harper was on the couple's bed and that his wife began waving the knife from side to side in a "slicing type motion" over him.

According to the Star, beside the filet knife, Carter added, Daniell Harper also had wielded a folding knife. The couple's three children, who were in the home during the argument, were unharmed and placed with other family members, he said.

Carter had no explanation for why the conversation would get to the point that Daniell Harper would confront her husband on their bed with two knives.

"What makes this different is who this person is," the sheriff, quoted by the Star, said. "These things happen every day."

Harper, who first signed with the Colts as a free agent in 2001, was arrested in June on a domestic battery charge after police said he hit his wife in the face. The case is pending.

Harper, who injured his right knee in the first half of Sunday's game, came within moments of scoring the winning touchdown for the Colts in the fourth quarter. He picked up Jerome Bettis' goal-line fumble with 21 seconds remaining and looked headed for the highly improbable score, but Steelers quarterback Ben Roethlisberger tumbled, reached out a hand and made a saving tackle at the Indy 42.

In a written statement Sunday, Colts president Bill Polian said
Harper's wound was an inch deep and a half-inch wide. It required
three stitches, but Polian said there was no damage to the knee joint or capsule.

Polian said the Colts had no details regarding events surrounding the injury but would investigate and report back to NFL officials.