DETROIT -- He pulled himself up onto the interview podium with a slight grimace, but as he sank into the director's chair, his beaming smile quickly returned.

Jerome Bettis gulped bottled water, and the sweat glistened on his round, expressive face. He was talking fast and a good octave higher than his normal register.

The record will show that Bettis carried the football only 14 times for 43 yards in Sunday's Super Bowl XL. Despite the best efforts of the Pittsburgh Steelers, he did not score a touchdown. It really didn't matter.

The story line everyone outside of Seattle hoped would come to pass did. Thirty-three years after he was born here in Detroit, "The Bus" became a champion when the Steelers defeated the Seattle Seahawks 21-10.

The story of the NFL's fifth all-time leading rusher is over. Finally, he is at peace. At last, he is home.

"It is an end," Bettis said. "It's been an incredible ride. I came back to win a championship, and now I have to bid farewell.

"It's totally, totally a blessing. I'm probably the luckiest football player who ever played."

There were tears on the Steelers' sideline in the waning moments of Pittsburgh's loss in the 2004 AFC Championship Game at home to the New England Patriots. Rookie quarterback Ben Roethlisberger, who threw three interceptions, felt responsible. He told Bettis that if he came back for one more season, he'd get him to the Super Bowl in Detroit.

"I'm just glad I could fulfill the promises that I made to him."

As a team, the Steelers were desperate to win for Bettis. Linebacker Joey Porter, the emotional leader of the team who usually leads them onto the field, asked Bettis to take the field first. 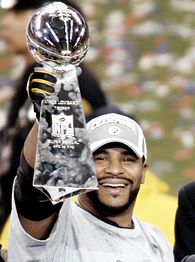 Said Porter, "It was Jerome's day. It was his time to shine in his hometown."

Bettis said he had been mulling retirement all season long. In the middle of last week back in Pittsburgh -- he couldn't remember whether it was Tuesday or Wednesday -- Bettis sat down separately with Steelers chairman Dan Rooney and president Arthur Rooney Jr. and told them he planned to retire after the game.

"I let them know this was it," Bettis said. "It was probably going to be my last game, either way. My body's been breaking down. I didn't want to talk to [head coach] Bill [Cowher] and distract him from preparation. Still, he knew this was the last ride."

Cowher, who was within earshot when Bettis said this was his last game, seemed happier for Bettis than for himself.

Steelers wide receiver Hines Ward was named the game's MVP, but he spent much of his postgame interview talking about Bettis.

"He's touched every player in that locker room in some form," Ward said. "For him to come so close and fall short of the Super Bowl last year, I took it very hard. It's not often you're playing with a Hall of Fame running back. I truly appreciate what he's done for my career.

"Having him come back, winning the Super Bowl, from where it all started, it's a fairy tale come true for him."

Bettis, like John Elway, goes out at the very top. He'll likely be enshrined in Canton, Ohio, as a member of the Class of 2010.

The image that will endure from Super Bowl XL? Jerome Bettis, beaming and clutching the Vince Lombardi Trophy in his pudgy hand.

"You hold the trophy because you've earned it," Bettis said. "I've waited 13 years for that."

So this is it? Super Bowl XL was his last game?