DETROIT -- An hour after Super Bowl XL ended, Antwaan Randle El almost got hit by a bus. No, not The Bus, but a bus. Still wearing his sweaty uniform, Randle El busted out from Ford Field, into a light snow, headed across the street to tape a bit for "The Jimmy Kimmel Show," when

Randle El can navigate a football field but occasionally forgets to look both ways before crossing the street.

The bus halted, its horn beeped and Randle El ushered his nine family members across the street, then into a building, down some stairs, through a kitchen, up some stairs and into a dressing room. He grabbed a rib off a tray, wolfed it down and yelled to the sky: "Thank the Lord!" 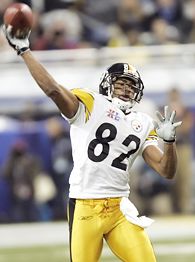 Randle El might not cash in officially until March, when he becomes a free agent, but his 43-yard touchdown pass in the fourth quarter to Hines Ward paid off right away. In the dressing room, Randle El signed his name on a contract to make $40,000 for a few minutes on the Jimmy Kimmel show. It was sweet for Randle El, a college quarterback who has been itching his entire life to be paid for throwing the ball. "It's one thing to throw a touchdown in the regular season," he said, "but the Super Bowl? Wow. Wow!"

The play was called "Fake-39 Toss X-Reverse Pass." The Steelers scored on it against the Browns earlier in the season, and Randle El knew it would be called during the Super Bowl. Before the game, he yelled to offensive coordinator Ken Whisenhunt, "Turn it loose, Coach! Turn it loose!" -- meaning call his number.

When the play was called, Randle El's eyes inflated. Ben Roethlisberger told him, "I got the end" -- meaning he'd block the defensive end and give Randle El time to throw -- and Randle El "lit up like a lightbulb." The play went as planned: Randle El took the ball, faked the reverse and threw while running right to Ward, who was open on a deep crossing route. Randle El thought the ball was perfect, and it was. "As soon as I let go, I was like, ooooh, catch it!" Randle El said. "And Hines did."

It was the play that produced the final score of 21-10 and effectively ended the Seahawks' hopes. It's hard to call it a "trick play" because the Steelers run it so often that there's nothing tricky about it, but still Seattle was caught by surprise. Taking advantage of the injuries to two Seahawks defensive backs -- Marquand Manuel and Andre Dyson -- the Steelers set up the play with a Ward reverse earlier in the game. "We've been working on that play for seven weeks," tackle Max Starks said. "We knew they were over-pursuing our toss play."

It figures that the first receiver in Super Bowl history to throw a touchdown pass was Randle El. Spend any amount of time around Randle El and you'll realize how much the fourth-year receiver misses playing quarterback, his position at Indiana. He often shakes his head and wonders why he's 5-foot-10 and not 6-5, but he has adjusted well enough to playing receiver that someone -- maybe his hometown Bears -- will offer up significant dough come the offseason.

Randle El didn't rest easy the week before his first Super Bowl. He was so nervous Saturday afternoon that he packed and unpacked his suitcase to pass the time. "He was jittery," his brother Curt said.

But after the game, he was loose. He got to the makeup room and immediately asked, "Where's the bathroom?" Upon exiting, he looked at Curt and said, "I wasn't too loud in there, was I?"

He dabbled with some American Crew products, looking at a bottle of foundation and saying, "Will I break out if I use this?" A stagehand told him no. "Oh, well, maybe I won't wear any makeup. Do you think I need some?"

He broke open a bottle of water (this is as crazy as Randle El gets) and gave his family a look. The Randle El boys started jumping and yelling "Da-da-daa! Da-da-daa!" when a lady carrying a tray of ribs entered.

"Do you play for the Steelers? That's my hometown," Natalie replied.

"You're from Pittsburgh and you don't pay attention to the Steelers?" he said, about to leave for the stage.

Seth Wickersham, an NFL writer for ESPN The Magazine, can be reached at seth.wickersham@espn3.com. You also can check out Wickersham's weblog.