SAN DIEGO -- Sunday's AFC Divisional playoff game between the Patriots and Chargers was a clinic in why BelichickBradyball is a Super Bowl success and Martyball continues to fall flat in the playoffs.

Following the Patriots' 24-21 win, Belichick is 13-2 in playoff games. Schottenheimer is 5-13 and has lost six straight postseason games. The uncanny way in which the Patriots rallied from an eight-point deficit in the final 8:35 is why Belichick could be heading to the Pro Football Hall of Fame once he gives up coaching. Despite 200 career victories -- a total that should qualify him for those honors -- Schottenheimer isn't even guaranteed a job with the Chargers next season despite a 14-3 season.

Schottenheimer may not have gone as conservative in his offensive play-calling as in past playoff eliminations, but the failures against the Patriots hit on a striking theme. The Chargers played not to lose. The Chargers called 19 first-down running plays for LaDainian Tomlinson, including five in which he gained 11 or more yards. Belichick and Tom Brady were all over the place. Brady couldn't find his rhythm in the first half so they junked some two-tight end sets and went to a three-receiver offense, sprinkling in some no-huddle once he got a rhythm. 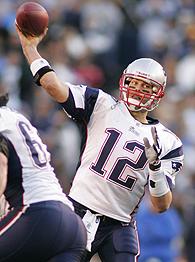 The Chargers continued playing not to lose, while the Patriots just tried to make enough plays to be one play ahead of San Diego at the end of the game. That strategy is why the Patriots, who were outplayed and somewhat dominated by the Chargers early in the game, sneaked away with a three-point victory and a chance to go against their playoff rivals -- the Indianapolis Colts.

"The definition of mental toughness is not letting anything get to you," Brady said after the game. "It's just staying focused not matter what's swirling around you, just continuing to mentally fight through whatever obstacles there might be, whether that be a certain play or situation or a bunch of things that come up as a football player. We have a bunch of mentally tough guys. Even though it doesn't all go well you still have to believe in yourself and have the confidence that you can go out there and play."