"What happens to a dream deferred? Does it dry up like a raisin in the sun? Or does it explode?"
From "A Dream Deferred" by Langston Hughes

The Washington Redskins quarterback played the most visible and important position in the most scrutinized sporting event of the year, but his historical burden was far heavier. Forty-one years after Jackie Robinson broke major league baseball's color line, 24 years after the landmark Civil Rights Act, Williams was the first black quarterback to start in the NFL's ultimate game.

On Jan. 31, 1988, in the second quarter against the Denver Broncos, all that anxiety, the fears and the doubts, were released through Williams' powerful right arm. He threw four touchdown passes -- including 80- and 50-yarders to Ricky Sanders -- and Washington scored 35 points, an NFL playoff record for a quarter. The Redskins won 42-10 in San Diego, and Williams was named Most Valuable Player. 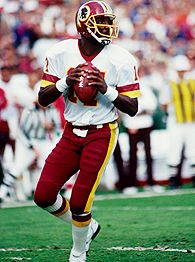 Tony Dungy, the 32-year-old defensive coordinator of the Pittsburgh Steelers, was profoundly moved.

"Hey, we have a quarterback," he thought to himself.

"Roger Bannister runs a four-minute mile -- no one has done it -- and right after he does it, you get three or four guys who do it," Dungy said last week in Indianapolis. "Doug Williams wins a Super Bowl and, all of a sudden, you begin to see Donovan McNabb and Michael Vick and Warren Moon."

And now Dungy and Lovie Smith, the man he hired a decade ago to help rebuild the Tampa Bay franchise, find themselves on the threshold of history. In retrospect, it seems preposterous, but in the first 40 Super Bowls there wasn't a single black head coach. On Sunday, there will be two.

"For me, it was the greatest thing from a professional football player standpoint," Williams said last week at the Senior Bowl. "I think when you talk about Lovie and Tony, it might even be more significant.

"African-American players have played in this league for a long time, but very few African-American coaches have been given the opportunity to coach in this league, as to say that we're not capable of doing it. I think what these two men have accomplished lets everybody know it can be done."

Dr. Harry Edwards, a professor emeritus at the University of California at Berkeley, has worked as a consultant for the San Francisco 49ers for two decades.

"It wasn't that [NFL] people were, quote, less racist, it was just, 'Wow, this guy can coach. This is somebody that I want to take my $600 million to $800 million investment and put it in his hands on Sunday afternoon out there on the football field.'"

Added Williams: "In America, we preach equality, we preach racial harmony. I think what happens Sunday is the fact that we have reached a plateau in the National Football League that two men were given an opportunity to coach a football team and, as Martin Luther King would say, 'They made it to the mountaintop.'"

'Guys who paid a price'

"It's a bonding between a group of guys who paid a price," Shell explained. "We spent a lot of years in the league trying to attain success, trying to become a head coach. And we had arrived, and this was the group, this was more than any other time in National Football League history.

In the span of one week, ESPN sat down with six of the seven coaches in that historic photo, as well as Mike Tomlin, the 34-year-old African-American recently hired as the Steelers' head coach, to discuss the significance of Dungy and Smith's appearance in Super Bowl XLI. Here are some excerpts:

Green: "It wasn't that long ago -- 1979 -- I was an assistant coach in the National Football League, and there were probably only five African-American assistants at the time.
"

Dungy: "When I started in 1981, it was a different environment. There were 28 teams and 14 [black] coaches in the whole league. So there were no role models. People were looking for that head coach that they had seen in the '70s, and that wasn't a young African-American guy. That was an older, more mature guy that maybe didn't talk the same way I did. It was going to take awhile to break that down."

Smith: "The numbers said we needed to take steps. Early on, there would be one minority coach on most staffs."

Lewis: "Growing up, when you saw Art Shell as a player and getting into coaching, you knew he stood for discipline, hard work and toughness. He was the first black head coach in the NFL [in 1989]. So he paved the path for all of us.
"

Shell: "The first night on the job I said to one of my coaches, a friend, Terry Robiskie, 'I have to make this thing happen. I have to have some success at this because it will open up doors to others in our race to have an opportunity to become a coach in the National Football League.'"

Green: "Not only was [Shell] the first [black] coach of the modern era, he was a successful coach. I think he felt an obligation to do the best job that he possibly could -- and that's what he did. I was the next African-American head coach, and I was hired in 1992. You don't point to being a head coach. You point to doing the best at what you're doing right then." 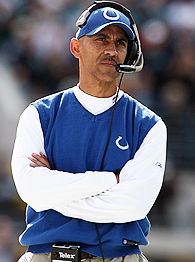 Dungy: "I played three years and wasn't sure what I was going to do. When I finished up [with the Steelers in 1978], Coach [Chuck] Noll said, 'You've got a good head for the game. If you'd like to coach, I think you would be good.'"

Lewis: "Tony was Denny's coordinator [in Minnesota], Herman was hired by Tony. I spent a summer with the Chiefs when Tony was there. I've known Lovie since we coached against each other in college. There is that kind of bond that you have."

Edwards: "His first day in Tampa [1996], he let the players know they could win a championship. We were going to be tough and physical. I think he got that philosophy in Pittsburgh, when he played under Chuck Noll."

Tomlin: "I don't necessarily deal in realism. It was a goal of mine, maybe because I worked with Coach Dungy on a day-to-day basis [at Tampa Bay in 1996]. It was tangible to me, so I didn't feel any discomfort in dreaming that."

Green: "It's really about access and opportunity. After being a successful coach in the National Football League, Mike Tomlin was given the opportunity to be the best coach that the Pittsburgh Steelers could hire."

Lewis: "Really, for the first time, an African-American was hired who maybe hadn't spent the time and did everything. We have watched it happen with other coaches, but Mike's hire was a first." 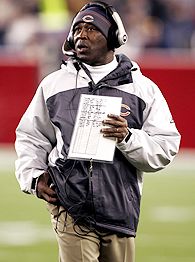 Shell: "All of a sudden, who is Mike Tomlin? A lot of people didn't know that he was a minority. My wife didn't know it before I told her."

Tomlin: "The ones who paved the paths for you, you can't pay them back -- you can never pay them back. But by being who you are and doing what you do, you provide opportunities for others.
"

Lewis: "I always had a lot of support from a lot of good people -- Dennis Green, Tony Dungy. These guys would always give up their time, have lunch, a cup of coffee and let me bounce questions off them. Emmitt Thomas, Ray Rhodes, Sherman Lewis, those guys really blazed this path. They get to see Tony and Lovie coach in this game."

Dungy: "The night before the [Colts-Chiefs playoff] game, we all had dinner. Lovie was talking about it, because Herm and I are in the AFC: 'You guys have got a double chance to get there. We can make this happen. We can make some history, and not for ourselves, but for the country.'" 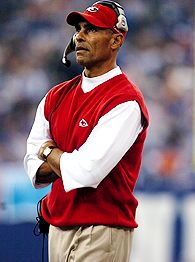 Edwards: "It was a fun dinner. We knew at the end of the day one of us wasn't going to move on. We all understood, when we sat there, 'Let's don't screw this up. Let somebody get to the big game.' And both those guys are going to do that, and I'm very, very happy for them."

Shell: Before the [conference championship] games came on, I remember saying, 'Wouldn't it be great of both guys got in the Super Bowl, and then at least one of them will be a winner.' Now looking at Tony and Lovie, that owner who was sitting on the fence a little bit might make a decision and say, 'Hey, these guys can do it.'"

Green: "Somebody's going to be the head coach of the world champion Super Bowl team, and it's never been done before, in a game where probably 75 percent of the players are African-American."

Tomlin: "It's awesome. It's important. I think that any time you have examples of people who are achieving in whatever field of endeavor that they choose, it's exciting, especially when they're competing on an international stage, in the biggest game. Hopefully, it's an encouragement to youth."

Dungy: "Watching all those games when I was a young person, you dream about playing -- 'Maybe I can be in the game.' -- but you never seemed to dream about being the coach. It never seemed possible. And now, some young people will be able to dream down the road, 'I might be able to coach that team one day. I might coach in the Super Bowl.' And I think that is really progress."

Shell: "I think the country has evolved. They have evolved to the acceptance of the black coach. It doesn't matter that he's black, it only matters that he's the coach."

Lewis: "Now, to see two coaches, it gives a ray of light for young African-American males, females, that whatever you want to achieve in life, if you work hard enough at it and you do the right things, you have an opportunity.