No, yawn, he is not nervous about being only the fifth rookie in league history to rush for 1,000 yards and start a Super Bowl in his debut season. Yes, yawn, he is proud the Colts' coaches elevated him to the starting lineup at the outset of the playoffs. Yes, yawn, he thinks his pass protection skills have evolved adequately through the season. And, no, big yawn, he didn't have any activities of note scheduled Tuesday because he planned to head directly from media day to a mattress to catch up on lost sleep.

Polite almost to a fault, Addai pretty much sleepwalked through the first part of his interview session, leaning back at times in his seat in the lower level of Dolphin Stadium to catch some sun.

But then a reporter asked him about high school buddy LaJuan Moore, who will arrive in Miami on Friday from Houston as part of Addai's official traveling squad support group. And suddenly, it was as if Addai, a good kid who still needs to grow socially into his newfound celebrity, had taken an intravenous transfusion of strong coffee.

"For me to be here, it's a blessing, no doubt about it," said Addai, the Colts' first-round draft choice. "But to be able to have LaJuan here with me for the game, to have him be able to watch me in the Super Bowl, well, it really is like a dream."

For those still unfamiliar with the oft-told story, Addai and Moore grew up playing football in the same Houston neighborhood and were teammates at Sharpstown High School. Until, that is, Moore moved up from his safety spot to make a tackle on Westbury High School wide receiver Mark Boone on Sept. 30, 1999. Addai said Tuesday that Moore delivered a "fierce hit" on Boone, who will also attend Sunday's game as Addai's guest. And life delivered a devastating jolt to Moore, a fringe college prospect, with the tackle leaving him paralyzed from the waist down.

There isn't much positive that can come from a crushed spinal cord. But in the seven years that have ensued, Addai has become a real-life prosthetic for Moore's once-crushed spirit. They talk just about every day -- "Not always football," said Addai, "but stuff like, you know, music, girls, movies, whatever." And at the end of their lengthy conversations, it's hard to tell who has been more uplifted, said Moore's mother, Charlotte Beverly.

When he is in Houston, Addai provides relief for Beverly, who had to quit her job to care full-time for her paraplegic son. He will bathe Moore, shave him, play video games with him and watch movies.

"I think they're just good for one another," Beverly said earlier this week. "The things that Joseph has done for LaJuan and our family, the kind of support he has given us, you can't repay that. But I don't think it's just a one-way street, either. They both benefit, I think, from the relationship and from seeing things through each other's eyes. I think there's something about LaJuan that really motivates Joseph, too." 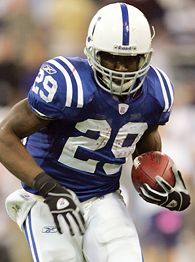 Indeed, as often as he possibly can, Addai reminds Moore that he is running for both of them. During the 2006 regular season, with Moore on his mind and the need to validate the Colts' selection of him as James' successor, Addai ran for 1,081 yards and eight TDs while working in a time-share arrangement with veteran tailback Dominic Rhodes. In three playoff games, all as the starter, Addai has added 217 yards and scored the winning touchdown in the AFC Championship Game victory over New England.

And then he spent 20 minutes on the phone with Moore later that night detailing the feeling of bursting unimpeded through a gaping hole on the right side of the line to finish a frenetic second-half Colts comeback.

A football junkie who recently curtailed his classes at Houston Community College, in part because of finances but also because of the difficulty in getting around, Moore studies the game now more than ever. Addai refers to his friend as "the black Mel Kiper" because of Moore's familiarity with draft prospects. Moore correctly predicted early last spring that Indianapolis, having lost James as an unrestricted free agent, would choose his friend in the first round.

He is, not surprisingly, prognosticating an Indianapolis victory over the Chicago Bears in Super Bowl XLI on Sunday evening. For now, Addai will have none of it, not based on Moore's recent track record.

Moore attended both games the Colts played in Texas this season, in Dallas on Nov. 19 and in Houston on Christmas Eve. Indianapolis lost both.

Said Addai, laughing: "He's supposed to be my good-luck charm. He better find some of that good luck before he gets here on Friday, man."

Actually, Addai hasn't needed much luck from outside sources, because he has created his own good fortune with an estimable work ethic. In a spring minicamp, Addai missed an easy handoff from Peyton Manning on a would-be draw play because he set up 6 inches too far to the outside. Manning showed him where he needed to be to accept the handoff exchange, and Addai hasn't make the same mistake again.

"He's one of those guys who you only have to tell once," Manning said. "He's really been a good fit for what we do."

Fact is, the Colts and Addai have represented an optimum fit for each other. Recruited by LSU as a wide receiver, he moved to tailback early in his career but found himself sharing time with the bevy of talented runners coach Nick Saban had at his disposal. Addai never rushed for 1,000 yards in college and only once logged more than 200 carries in a season.

So the time-sharing arrangement with Rhodes, who rushed for 641 yards during the regular season, was something Addai was already accustomed to. Rhodes noted earlier this week that, unlike some high-round rookies who might have chafed at sharing the position, Addai never protested.

Addai attributed his ready acceptance of the role as a lesson learned from an old friend.

"Everything that LaJuan accomplishes, big or small, it takes patience for him to do it," Addai explained. "For him, progress is always kind of [incremental], but then when he is successful, it means that much more to him. Watching the stuff he's been through, it's taught me patience, that not everything comes immediately. It's helped me a lot this year."

Len Pasquarelli is a senior writer at ESPN.com.