MIAMI -- There's a pretty good chance the Super Bowl XLI performance of a player with the surname Manning will determine the fate of the Chicago Bears in Sunday night's championship game.

The twist: The game might be as much about Ricky Manning as Peyton. 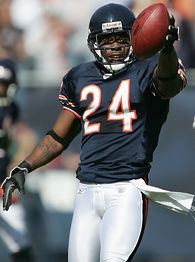 Yep, if you're looking for a player who is crucial to the Chicago game plan but who might still be flying a tad below the radar in terms of public consciousness, Manning is a defender worthy of close attention. There is considerable speculation that the Bears will lean heavily on a nickel scheme to try to counter tight end Dallas Clark, who has become a go-to receiver for Peyton Manning in the playoffs and leads the Colts with 17 postseason catches.

And a big part of that speculation is that Ricky Manning, and not middle linebacker Brian Urlacher, will draw the assignment of shadowing Clark. In fact, Manning has done nothing this week to dispel the rumor that he often will be locked up on the Colts' tight end.

"My role is going to be very important," said Manning, one of the NFL's premier nickel cornerbacks. "It's important against any offense that uses a lot of three-wide receiver sets, and they use Dallas Clark as the third wide receiver."

Indeed, with standout slot receiver Brandon Stokley on injured reserve with a ruptured Achilles, and venerable Ricky Proehl having done little to replace him adequately, versatile Clark essentially has become Indianapolis' third wideout. The four-year veteran is flexible enough to align in-line as a conventional tight end, can move out into the slot and even can flank 15-20 yards wide to the sideline.

It could be a gamble for Chicago to rely too much on a nickel look. That would mean having to stop the Indianapolis running game without strongside linebacker Hunter Hillenmeyer on the field. It also would leave Manning covering the much bigger Clark. But the Bears might not have much choice against Clark, who has a league-best 281 receiving yards in the playoffs.

Manning, though, also has enjoyed some success in postseason play. The three-year veteran, signed by the Bears as a restricted free agent last spring, has five playoff interceptions in his career. That includes one pickoff this year and four in 2003, three of them in that year's NFC Championship Game, when Manning was with the Carolina Panthers.

No one is counting on Manning repeating that feat Sunday, but if he can control Clark in the middle of the field, the former UCLA standout will provide the Bears an opportunity for an upset victory.

Beyond the performance of Ricky Manning, the Bears will win if ...

1. The Chicago cornerback tandem of Nathan Vasher and Charles Tillman can keep Colts wide receivers Marvin Harrison and Reggie Wayne from making big plays, which could be a daunting task. Despite their reputation as a Cover 2 defense, the Bears played roughly 45 percent man coverage in the second half of the season and in the playoffs. That means Chicago could have a couple of Cover 2 cornerbacks, guys who don't run especially well and are known to overreact to double moves, playing one-on-one on the outside. If the Chicago cornerbacks bite on the play fakes from Peyton Manning, the NFL's best sleight-of-hand artist, it could be a long day. So Tillman and Vasher, who love to move up on the ball in front of them, must maintain position and get a bit physical with the Colts' wideouts.

2. Tailbacks Cedric Benson and Thomas Jones, the Bears' two-headed monster in the running game, take pressure off quarterback Rex Grossman and keep Peyton Manning off the field by combining for 125-150 yards on the ground. The Indianapolis defense has demonstrated marked progress against the run in the postseason, but the Bears have to challenge the Colts' suddenly resurgent front seven. Benson and Jones are a nice complementary tandem, and the Chicago coaches seem to have a good feel for when to switch one for the other. The Bears averaged only 4.7 yards on first-and-10 in the regular season, the eighth-worst mark in the league, and they'll have to do better Sunday evening.

3. The erratic Grossman remains fearless in his throws, even if he starts slowly, and he makes some deep connections. As inconsistent as he can be, Grossman won't back down from the tough throws, and he is a surprisingly accurate long-ball passer. Fleet Bernard Berrian might be able to get over the top on the Indianapolis cornerbacks, and that would be a huge plus. But it seems Grossman's best throws are the skinny post to Berrian and the deep seam route to tight end Desmond Clark. Especially in a game in which he figures to experience some nervousness, Grossman needs to play to his strengths, so offensive coordinator Ron Turner must dial up plays with which his quarterback is comfortable.

4. Return specialist Devin Hester can exploit the Indianapolis special-teams units, especially the kickoff coverage group, which has been just as shaky in the playoffs as it was at times in the regular season. In three playoff contests, Indianapolis has allowed an average kickoff return of 24.3 yards. In the regular season, Chicago ranked No. 6 in best average field position after a kickoff, at the 29.8-yard line. Indianapolis, on the other hand, had the fourth-worst mark defensively for average starting point after a kickoff, the 30.3-yard line. To keep up with the Colts' offense, the Bears probably will need to win the kicking game. As he demonstrated in the regular season, Hester is an explosive player who can affect field position dramatically and score from anywhere, even 8 yards deep in the end zone. It will take some of the pressure off Grossman if Hester is able to provide him a short field on occasion.

5. Chicago right offensive tackle Fred Miller can control Indianapolis left defensive end Robert Mathis, who led the Colts with 9½ sacks during the season. The more high-profile matchup in the pass protection game will be Bears left tackle John Tait versus Colts right end Dwight Freeney. But the Bears tend to provide some help for Tait, who has struggled with most speed rushers this year, by using a tight end or back to chip on the right end. If that is the case, Miller -- a mammoth run blocker but always suspect in pass protection -- will have to handle explosive Mathis by himself. Miller can engulf undersized Mathis, but if he allows the Indianapolis rusher to press his outside shoulder, and get outside and turn on him, it will be a problem. Notable is that neither of the Indianapolis ends is very effective when playing on grass.