FOXBOROUGH, Mass. -- The Patriots, the dynasty that simply won't die, won 12 games again this year. But what's next is what all the fuss was about to begin with.

There was despair in the offseason following the departures of David Givens, Willie McGinest and later Deion Branch, but you'd have thought the sky was falling in parts of New England and across Patriot Nation when popular place-kicker Adam Vinatieri signed with the Indianapolis Colts. See, folks here thought Vinatieri hung the moon and the stars, and with good reason. A field goal was the difference in each of the team's three Super Bowl wins, including two Vinatieri game-winners in the final moments, and his field goals factored into two other three-point playoff victories. Those kicks earned him recognition as the most clutch kicker in league history.

But Vinatieri's history. At least, he's Patriots history. He's a topic again now, though, because his replacement, rookie Stephen Gostkowski, has no playoff history.

We're talking about a franchise whose story would read very differently if not for Vinatieri. He was New England's closer. New England not having him for this playoff run isn't quite as big a concern as, say, Chicago's quarterback or Indianapolis' run defense, but the state of the new kicker's nerves nonetheless stands as the biggest question surrounding the Patriots, otherwise by far the most proven of the playoff entries.

Vinatieri was at his best under playoff pressure, seemingly oblivious to it. Gostkowski hasn't found himself in many pressure situations so far in his career. Other than, you know, dealing with never-ending comparisons such as this article. 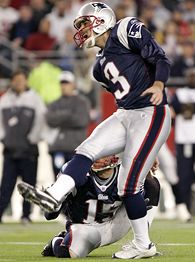 Gostkowski, a fourth-round pick from Memphis, had a solid debut season, first winning a training camp competition with veteran Martin Gramatica and then connecting on 20 of 26 field goals and all but one of 44 extra-point attempts. His highlight was a Gillette Stadium-record 52-yard field goal just before halftime of a win over the Bears, his only attempt from 50 yards and beyond. But for the season, Gostkowski attempted (and made, in the opener against Buffalo) only one game-tying field goal, tried only five in the fourth quarter and wasn't asked to make a kick to win a game.

Gostkowski, along with most of the players, was nowhere to be found in the team's locker room during Wednesday's media availability period. The rookie passed through on his way to the training room and politely declined an interview request, citing head coach's orders. If only it were that easy to avoid the spotlight, the glare of which promises to intensify now that we've reached the time of year when Vinatieri forged his legacy. Every time the Patriots eschewed a field goal this season and of course every time Gostkowski missed one couldn't help but reflect on Vinatieri, romanticizing him as if he'd never missed a single kick.

That won't go away Sunday against the Jets or, frankly, until Gostkowski makes a few big playoff kicks of his own. The Patriots may very well need him immediately -- the first meeting between these teams was decided by seven points (New England), the second by three points (New York).

Gostkowski and the Patriots aren't alone. He isn't the only young kicker with something to prove in these playoffs.

He isn't allowed to speak with us about his plight, but should he feel the need to talk he need look no further than this week's opposition to find someone who understands. Sort of.

Jets second-year kicker Mike Nugent is getting his first taste of the playoffs. New York drafted him in the second round of the 2005 draft partially in response to Doug Brien costing the Jets a trip to the 2004 conference title game. Jets fans are no doubt eager to see how Nugent handles the postseason himself.

Chicago's Robbie Gould -- a former member of the Patriots' practice squad -- experienced the playoffs as a rookie last season, but his next postseason field goal attempt will be his first.

The Chiefs' Lawrence Tynes is getting his first taste of the playoffs.

The Chargers' third-year kicker, Pro Bowler Nate Kaeding, is seeking to atone for a critical miss in a first-round loss to the Jets two seasons ago.

And then there's Gramatica, who landed in Dallas after the Cowboys released the shaky Mike Vanderjagt, who was replaced in Indianapolis by Vinatieri.

Gostkowski, though, is under the most pressure of the group because of the shoes he's attempting to fill, the footsteps he's following, the legendary foot feats he can't escape. But he can't be Vinatieri nor can he try. He can't and so far doesn't appear to have gotten caught up in history.

The 2006 Patriots soon will be history if Gostkowski fails to do his job in the inevitable close games that these Patriots historically have found ways to win. Something to keep an eye on is the fact that Gostkowski is working with his third holder of the season, backup quarterback Matt Cassel.

No one knows for sure until the kid proves it, but the Patriots had good reason to believe when they chose Gostkowski that he could handle the pressures of the job. Anyone can see he has the leg strength, but the Patriots, who place such a premium on a player's mental toughness, liked the fact that Gostkowski played baseball at Memphis, that he wasn't just a kicker but an athlete. That same quality endeared Vinatieri to his teammates here.

"I think that a lot of times," Belichick said at the conclusion of the draft's second day, "guys who are athletic, perform other athletic skills, or are involved in other competition such as baseball or golf or any other sports, I think that helps a player, particularly a kicker, in terms of his mental toughness, his competitiveness, his ability to concentrate and focus and perform that one individual skill and the opportunity that he has to do it."

Beginning Sunday, Gostkowski gets a chance to create a legacy of his own. Belichick on Wednesday expressed complete confidence that his rookie kicker will come through.

"If you don't have confidence in them, you should find somebody else."