PHILADELPHIA -- Geraldine Barber could always spot him. It didn't matter the level of football. Pee wee, high school or college. She was always able to find where her son Tiki was on the field. He usually had a trail of people following him.

That's why it's no wonder her eyes immediately locked onto the retiring New York Giants tailback as the final seconds ticked away in the Giants' painful 23-20 wild-card loss to the NFC East rival Eagles on Sunday. Geraldine knew where Tiki was. She just had to follow the long line of people chasing after him as his brilliant 10-year career came to a close.

"I used to think my career was defined by not winning a Super Bowl. But I think looking back on my career, they'll see someone who was a competitor, someone who always played hard and never gave up."
Tiki Barber, Giants running back

"It's kind of bittersweet, because it wasn't supposed to end this way for him," said Geraldine, tightly clutching the left arm of her son Ronde, Tiki's twin brother and a Tampa Bay Buccaneers defensive back, as they left their luxury suite to join Tiki outside the Giants locker room. "I wasn't too emotional at the end, because I realize he's ready to begin another stage of his life. It was actually more emotional for me when he and Ronde left for college. I was left with an empty house. My two sons were gone.

"But I could tell where he was on the field. I was always able to do that. I just had to follow all of the cameramen following him. He's been doing this a long time. He's 31, and he's been playing football for 25 years. But I'm very happy for him. It's time to turn the page, turn to the next chapter, like any good book." Ronde was stoic. It was a particularly biting way for his twin brother to end his career. He wanted to jump on the field and help prolong Tiki's career. It was driving him crazy as the Eagles ate up chunks of yards in working their way toward the final outcome. One very strong bond in their lives was broken. 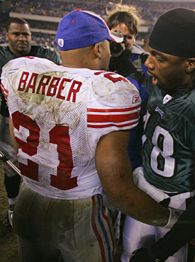 "It was tough, real tough," Ronde said. "This was Tiki's last game, and I always wanted to think Tiki would come out of this on top. It's a lot harder watching than playing, especially when it comes to my brother. But he's ready for this next step in his life. He didn't speak to me about what he was going to do, in announcing his retirement this year. But it will be different for him and for me. Tiki's ready to take on divergent paths. It was just tough watching it."

Tiki finished the game with 137 yards rushing on 26 carries, helping to set up all four Giants scores. But all that was spoiled by David Akers' 38-yard field goal as time expired.

"It's fitting," said Tiki, who will embark on a broadcasting career. "It's fitting because the last game of my career came in one of the hardest places I've played, against guys like Brian Dawkins and [Jeremiah] Trotter. We had great opportunities in the red zone, and we came away with field goals. Their 12th man certainly played a part. We got a little bit antsy."

Dawkins made sure he sought Barber out after the game. The two Pro Bowlers embraced, and the Eagles safety told Barber, "You're a warrior." "I've always said I respected that dude," Dawkins said, in reference to Tiki. "Week in and week out, he performed. He was one of those guys you were always able to count on." Whereas Barber knows what direction he'll be headed in the fall, there is uncertainty surrounding the job status of coach Tom Coughlin, whom Tiki endorsed after the game. "Coach Coughlin has done great things here; you have to judge a man on what he does and the adjustments he makes," Barber said. But mostly Barber reflected. He seemed to be in a daze, not really believing he had just played his final game. He emerged from the Giants locker room, hugging and greeting old college friends, and family, giving his mother a long hug. "I used to think my career was defined by not winning a Super Bowl," Tiki said. "But I think looking back on my career, they'll see someone who was a competitor, someone who always played hard and never gave up." Someone who always seemed two steps ahead of the crowd chasing him.

Joseph Santoliquito is a frequent contributor to ESPN.com. He can be contacted at JSantoliquito@yahoo.com.